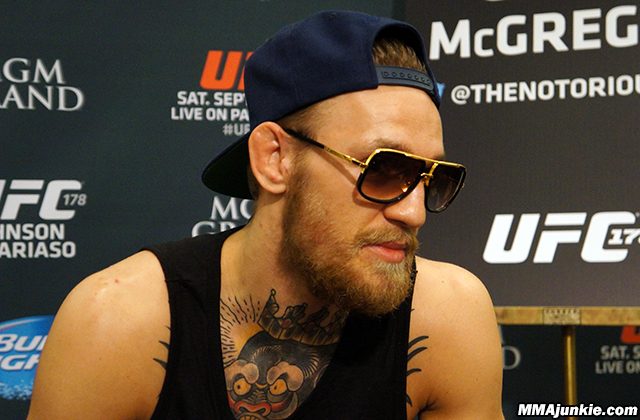 Conor McGregor heads back to the Octagon with to face Donald Cerrone at UFC 246, a Welterweight fight which according to him kicks off his personal fighting season which he plans to use in rejuvenating his career and in that, plans starting out with a win.

McGregor also claims to have had Many options at 155 and also had to pick a division but took a Welterweight clash against Cerrone because it made more sense and looked perfect for his second fight in the Octagon since 2016.

The former two weight champion is happy to fight at Welterweight and had no issues fighting Cerrone at Lightweight and accepted the fight at the weight because he feels He is better fighting at 170 than 155.

Conor McGregor views his Welterweight fight with Donald Cerrone as one that opens up a huge possibility for big fights in 2020 and didn’t hesitate in naming the fighters he will love to face in his new division.

Conor McGregor for one’s isn’t going to into the fight with a grudge against Donald Cerrone and made clear he only respects the fighter and took the fight because he loved returning to the Octagon in a fight Friendly match-up.

“Well, I said I would fight him, right?” he said. “Me and Donald have a history. Not a long history, but we’ve had a history. It’s an exciting bout. It’s a fan-friendly bout. It’s a fight that excites me.

“I appreciate Donald, I have to say. He’s fought a lot of times since the last time I saw him, at the (Jose) Aldo press conference many, many years ago. He’s gone on and fought so many times. He’s also a family man, with his grandmother and these things. I appreciate that. And I also appreciate his method he went about it, with the Proper whiskey. So much work goes into these things – to see that bit of respect, I appreciate that. I look forward to having a good bout.”

The Former featherweight and lightweight Champion looks forward to the fight, promised action, a good performance and most of all promises magic, something he is known to do in the past.

“I’m happy to come back and have my comeback fight in the beginning of my season against Donald, and I look forward to it,” he said. “It’s going to be a good night, and I’m going to shine here on Jan. 18. I’m going to create magic inside the octagon, like I have done many times before. But this time it’s going to be something special.”