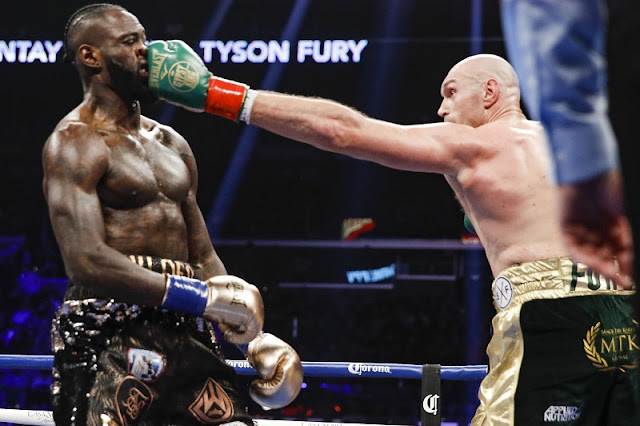 The unbeaten and self acclaimed Lineal Heavyweight champion Tyson Fury takes another huge risk facing fellow unbeaten WBC heavyweight champion Deontay Wilder for the second time, having survived two serious knock downs in the ninth and 12th round respectively to settle with a draw in their first meeting.

However, while promoting the fight the 6.9 feet brit made media rounds ahead of his February 22 Pay-Per-View rematch with Deontay Wilder (42-0-1, 41KOs) which is to take place at the MGM Grand Arena live on ESPN+ and Fox Sports. due to his affiliation with ESPN, he was presented with the opportunity to make a media presence at ESPN’s College Gameday and also Fiesta Bowl after which he elaborated on the differences of Team Sports and a boxer fighting in the ring.

“You look at team sports – if you’re having an off day, the other guys will carry you, maybe you get substituted,” Fury (29-0-1, 20KOs) explained to the ESPN College Gameday crew. “They do whatever they do. In a boxing fight, you have an off day, you get knocked out.”

Fury also went on to talk about his recent fights and what it takes to be a champion like him perceived tune-up versus Sweden’s Otto Wallin back in September, when he got caught multiple times and even had a serious cut but was able to keep his composure and ground out a unanimous decision.

“In my last fight, I had an off day,” Fury admits. “I wasn’t feeling great. I was under the weather. I got a massive cut, had to get 47 stitches. Nothing went right but I managed to grind out a victory and that’s what champions do. They win when they are not feeling great.”

Fury has gone 4-0-1 since his somewhat triumphant return from his 30 month absence from Sport which game after magnificent performance against Wladimir Klitschko back in November 2015, snatching heavyweight titles and the Lineal championship belts in the process before being banned for a failed drug test.

Since the Wilder fight Fury has defeated less challenging Sefer Seferi, Francesco Pianeta, Tom Schwarz and the more challenging Otto Wallin ahead of the rematch with Wilder. A fight that will definitely boils down to Wilder having that One big punch opportunity or Fury just displaying his boxing prowess over 12 rounds and winning a decision. These attributes have been emphasized by both and on this Fury made clear why he sees himself as the winner in the rematch.

“The most important thing a wise trainer taught me, your feet will get you in trouble, and get you back out of trouble again,” explained Fury. “Not a lot of people practice footwork in the sweet science of boxing. They look for strength, they lift a lot of weights, they look for one punch knockouts. It’s great for the highlight reel.

“What pays the bills is the skill. If you fail to learn the skill at the top level you will be found wanting. Just like Wilder did last time and just like he will do again on February 22.