Skip to content
HomeSports NewsTim Tszyu – Jeff Horn Is No. 1 In Australia, Need To Beat Him

Tim Tszyu – Jeff Horn Is No. 1 In Australia, Need To Beat Him 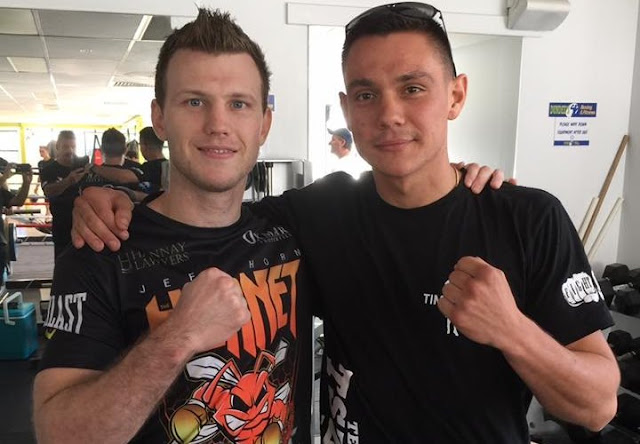 Unbeaten prospect Tim Tszyu is currently heading on a collision course with Former WBO welterweight Champion Jeff Horn, a fight that is currently targeted for a date in April and remains the biggest possible boxing match up to be made in Australia.

Jeff Horn rejuvenated his professional career with a dominant decision win over middleweight contender Micheal Zerafa a month ago, dropping him twice in a bloody battle that served as a perfect revenge to his knockout loss in thir first fight.

Tim Tszyu is the son of Hall of Famer and former unified champion Kostya TszyuT considers taking a big risk in facing the biggest name in Australia with hopes of being propelled into a world title picture before the end of the year. However this depends on whether or not he will defeat Horn.

Tim Tszyu has been reported to be unhappy with the purse split allocated to him for the Horn clash but that not true according to Tszyu, who says money won’t be an obstacle to the anticipated match up and will take just about any percent as long as he gets to beat Horn.

Tszyu wants to clear out the division and become No. 1 Nationally before thinking of going International and has to defeat the biggest name presently to that.

“I don’t care about the split. It can be whatever he wants it to be. The only thing I care about is beating the best in Australia so I can then go and take on the world. I entered this sport to become the best, not to earn money. There are things that come with becoming the best, but I didn’t come to this sport to make money out of it,” Tszyu told Daily Telegraph.
“Horn is the number one guy in Australia and I need to clean out Australia before taking on the world. I have to beat Horn before I go on to bigger and better things. That is the only reason I want this fight.”