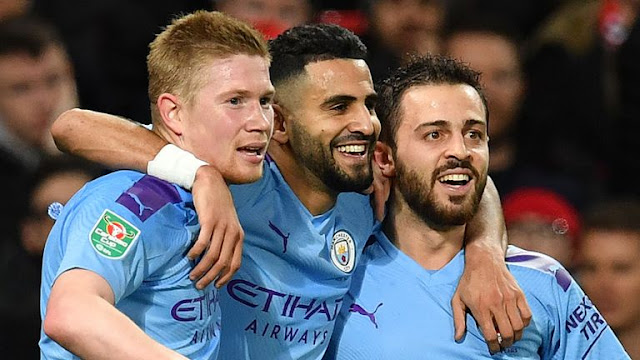 Bernardo Silva shot home a wonderful curl before Riyad Mahrez doubled the lead before a disorganized United defense saw Andreas Pereira score an own goal to give City a three goal lead into the break.

Ole Gunnar Solskjaer made a few changes during the break, bringing Nemanja Matic to stabilize the midfield and with that caused a massive change in the play before Marcus Rashford scored one and came close to scoring another. However, the City defense had learnt their lesson and held on to seal a win with a two goal advantage into the second leg.

Manchester City were incredible in the first half and the goal was no surprise, a stunning curl into the top corner of the United goal. A right footed curling shot that left the United goalie helpless in the 17th minute. However that was just little as after many waisted opportunities, Bernardo Silva played Mahrez through on goal and he rounded the goal keeper for the second goal.

With continued dominance a third goal was lurking in the horizon but United were rather unfortunate though it was clear City deserved it. A swift counter from the right saw Kevin De Bruyne beat Phil Jones very easily and played a shot at David DeGea who deflected it towards Andreas Pereira, who mistakenly hits it across the line.

Manchester United recieved a huge Comeback hope when Marcus Rashford got played through by Mason Greenwood and the prolific Rash made no mistake from inside the box.

Both teams will meat again on the 29th of February for the semi final second leg but for now, both teams turn their focus to the Premier League weekend where Manchester United host Norwich and Manchester City take on Aston Villa on Sunday.