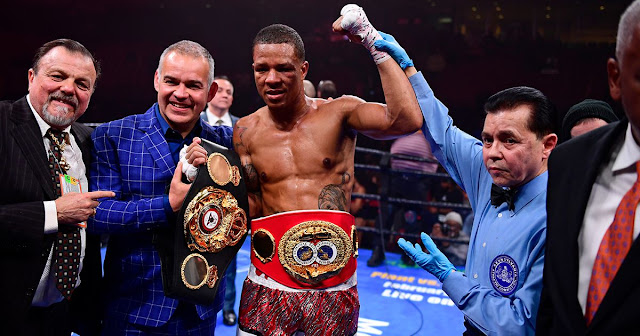 Jeison Rosario gave Julian Williams a sip from the cup of his own tea by ruining his homecoming and ended his title reign abruptly with a fifth round upset victory on Saturday night at the Temple University’s Liacouras Center.

Rosario, who entered the fight as a 30-1 underdog stunned the boxing world and totally ran through Julian Williams, snatching the IBF, IBO and WBA 154-pound titles away from Williams, who intended defending it for the first time.

Williams made it back to his feet but couldn’t hold on as Rosario finished him off with an upper cut and a right hand that sent him tumbling from the ropes to the canvas before the referee Benjy Esteves stepped in to stop the fight at exactly1:37 of the fifth round.

Williams was fighting for the first time since going in a 6-1 underdog to earn unanimous decision win over former Unified champion Jaret Hurt and winning the IBF, IBO and WBA 154-pound titles in Virginia.

“I’m so emotional in this moment right now,” Rosario told FOX’s Heidi Androl in the ring through a translator. “When I lost my last fight, I said I will never lose again until I become champion of the world, and that’s what happened tonight. I came prepared. I knew before the fight I was going to win it.”

Rosario has only been defeated ones in his professional career and that was against Nathaniel Gallimore, who dropped Rosario three times before defeating him via six round stoppage in April 2017. Williams defeated Gallimore via majority decision one year after.

“I would have started doing training camps a little earlier if I had known these were going to be the results,” Rosario said. “Thanks to Philadelphia and to Julian Williams. Without this opportunity, I wouldn’t be champion today.”