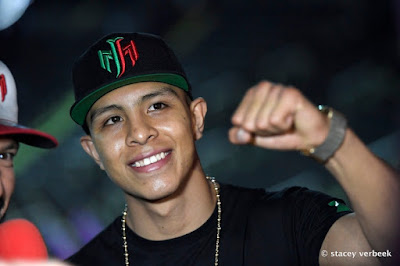 Munguia, who has been training at the Otomí Ceremonial Center , 3400 meters high, made his way home after seven weeks of preparation and even made a little work out, body work at the Alto Boxing Club to ensure he remains fit for the fight.

The 23 year old, Munguia Knocked out Sadam Ali to claim the WBO junior Middleweight title on May 12, 2018 and went on to defend the title five times against contenders and former champions. Due to weight issues, Munguia has decided to move to the 160 pound division, where he seeks greener pastures and a possible world title and for a start “Spike” O’Sullivan is there to welcome him.

Munguia will be taking on a contender in his new weight class on Saturday. However, this doesn’t give him much to worry about as he believes his performance will be almost perfect due to the absence of weight issues, claiming he sacrificed so much to make the 154 pound division.

“Those six pounds that I am gaining will help me a lot. I was already going theough a lot of wear to reach 154. I believe that now I will get more complete. I’ll have a lot more in the fight,” said the 23-year-old from Tijuana.
“Let’s see how I feel, now that I don’t have to wear out my body with an extra six pounds [to my frame]. It was quite a sacrifice [to reach 154].”

Munguia, who hails from Tijuana, Mexico is planning to make his presence known at the 160 pound division with a knockout victory over “Spike” O’Sullivan and expects the knockout in the first four rounds of his middleweight debut.

“I think it is a fight that’s going to end by knockout. I think in the fourth round,” Said Munguia

Munguia has also brought former four division world champion, Erik Morales into his corner and says his presence has brought more impact to his preparation and with his experience against top fighters in the world, helped him evade mistakes he (Morales) made while he was still a professional.

“It has helped me a lot. He has a lot of experience in world championship fights, he has fought against the best fighters in the world. He has enough experience. The mistakes he has made, I try not to make them. We try to grab as much good as possible from each person who is on the team,” concluded Munguia.