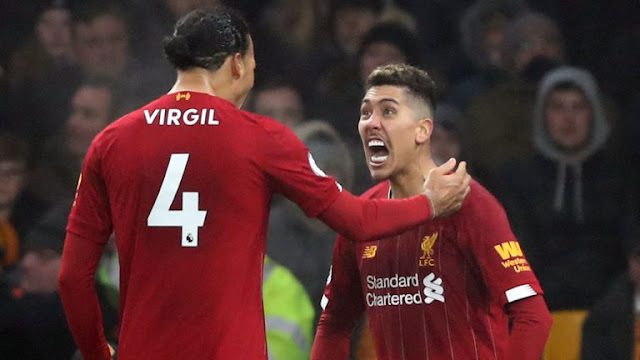 Liverpool were tested but did everything necessary to defeat their host Wolves at the Molyneux. The unbeaten League leaders are now 14 points ahead of second place Manchester City with the Win.
Watch Video Highlights Below

Goal : 8′ 0 – 1 Jordan Henderson
Liverpool go ahead after some really unprofessional defending from Wolves, Henderson was in the right place to flick in Trent Alexander-Arnold’s near post corner past Rui Patricio.
VAR replays got checked to see if the ball brushed Henderson’s hand in the process but the goal was allowed.
Goal : 51′ Raul Jimenez 1 – 1
Wolves are now leveled! Andy Robertson got a little sloppy in the Liverpool defense  and got bested by Adama Trade very easily and that was that as his cross was met by Raul Jimenez in the Air to score the leveler.

Goal : 84′ 1 – 2 Roberto Firmino
Liverpool are back in front, Roberto  Firmino finds the net with a masterful performance. Salah made sure the ball was kept in play before Henderson then gives ball to Firmino and the Brazilian dribbles before firing a left footed shot post Rui Patricio for the winner.

Chelsea VS Arsenal
League leaders Liverpool FC visit Wolves at the Molineux on Thursday with hopes of increasing their comfortability at the top of the Premier League table. WOLVES will be hoping to build on their 3 – 2 win over Southampton in their last outing.

Liverpool FC defeated Manchester United 2 – 0 with a very dominant victory at Anfield Stadium and that was the only team they were Defeating. However, onlike