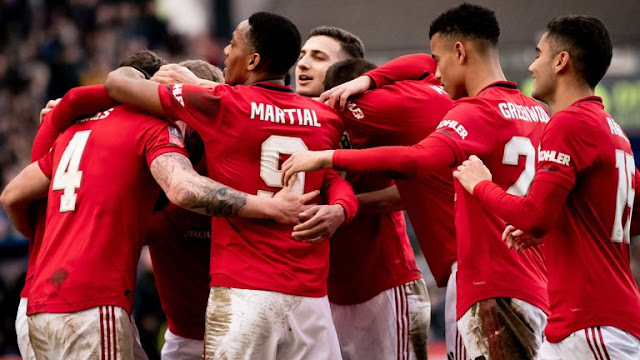 Manchester United demolished Tranmere Rovers with six unanswered goals in the FA Cup fourth round tie at Prenton Park. Harry Maguire opened scoring at exactly ten minutes into the game and from then on, it was one way traffic from the Red Devils.
Watch Video Highlights Below

Goal : 10′ 0 – 1 Harry Maguire
Harry Maguire kick starts a possible victory with a screamer, dribbling past David Perkins, He fires a shot from 20 yards that deflects of Peter Clark’s head into the top corner

Goal : 13′ 0 – 1 Diogo Dalot
Dalot double the after just three minutes from the  first goal. The Portuguese runs down the edge, dribbles past two defenders before blasting a shot past Scott Davis to double the lead.

Goal : 16′ 0 – 3 Jesse Lingard
Manchester United seem to be running a riot with the score as Maguire moves forward, fires past two players before setting up Jesse Lingard, who has a huge space to curl in a nice goal.

Goal : 41′ 0 – 4 Phil Jones
Phil Jones adds to their predicament with a towering header, despite the rush which says Maguire fall Jones was able to go higher than everyone.

Chelsea VS Arsenal
Tranmere Rover host Manchester United for the first time in an FA Cup tie with their last and only previous meeting back in 1976/77 League Cup tie which the Red Devils won 5-0.