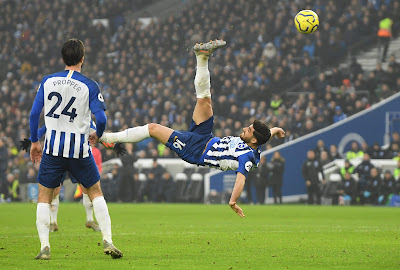 Frank Lampards’s Chelsea FC were on their way to a second successive victory since their upset 2 Nil loss to Southampton last weekend but this got soiled at the last minute by Jahanbakhsh’s stunning 15 yards overhead kick in the final 10 minutes, leaving everyone on their feets at the American Express Community Stadium.

The Blues took the lead early in the first half , after some sloppy defending from the Brighton Players fed Azpilicueta with a rare chance from three yards out but the opening goal came three minutes after Zouma deflected a possible goal at the other end.
Brighton were brought to life by the opening goal but instead of an equalizer where forced to make an early substitution as Burn came off after a rough tackle and Bernardo came on to replace him. Chelsea almost doubled their lead after Tammy Abraham got hold of a lose ball from the defenders and racing down the pitch.

Chelsea , who have been on the losing side in one out of sixty games they led into the break continued their dominance and almost doubled the lead 10 minutes after the break when a quick break away after a corner at the opposite end fed Pulisic who went one on one with Montoya and fired a slow shot but Ryan was able to take care of the situation.

However, Chelsea who seemed on their way to a win got their hearts broken when a Brighton corner is fired into the box , with dunk winning it at first before Jahanbakhsh desided to send the ball into the bottom corner of the net with a stunning overhead kick in the 84th minute.

As usual, Chelsea rallied for a winner in the final minutes, while both sides had equal chances of getting the winner but that was all both sides could offer within the given time. Jahanbakhsh has now score twice in his last two games for Brighton after failing to find the target in his last 26 games for the club.

Watch Out For Highlights