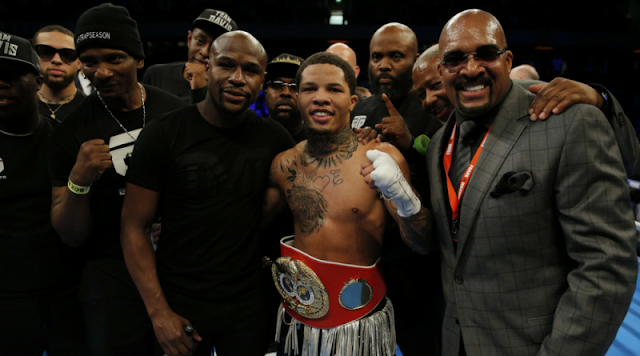 Gervonta Davis has just recently made his lightweight debut and in that a one sided 12 round knockout victory over former Gold medalist Yuriorkis Gamboa, a fight that met Box Office expectations cutting across three different markets. This makes Mayweather Promotions CEO Leonard Ellerbe believe it’s time He shows up on Pay-Per-View.

However, this is not so easy because only two can play the game and in that, must also have a Pay-Per-View reputation. This only points fingers to stablemate and Mexican four division champion Leo Santa Cruz, who earned the Pay-Per-View status fighting for the better part of the last decade.

Leo Santa Cruz debuted on Pay-per-view with a unanimous decision win over Miguel Flores on Deontay Wilder Vs Luis Ortiz undercard but despite being a sub-per victory, Gervonta Davis will just be the perfect dancing partner for the Mexican.

Santa Crus wasn’t impressed with Gervonta Davis 12th round knockout victory over Yuriorkis Gamboa but before then had spent his last days at the 130 pound divison calling out Davis and Gary Russell Jr. and eventually dumping the WBA Junior Lightweight title for an adventure at 135, a move Davis has just made.

“I thought Gervonta was going to knock out Gamboa in the first few rounds,” Santa Cruz told BoxingScene.com in an interview. “Gamboa is a fighter who gets hurt easily once you catch him with a good shot. I think Gervonta didn’t train the way he was supposed to train over the holidays. Maybe he was partying, or something, and it made the fight a lot harder, and him not look good. Maybe he thought the fight was going to be easy and underestimated Gamboa, but I’m ready to fight Davis.”

Davis has most recently taken himself on a three city tour which has also seen him demolish his last three opponents Hugo Ruiz, Ricardo Nunez and Gamboa and if his next move will be a pay-per-view fight then Leo Santa Cruz should definitely fit the bill.

Santa Cruz has always been open about his desire to face the Baltimore bred knockout artist, whether at 130 or at 135, nurturing believes that this match up will eventually happen and needs no other test to make it happen. He however believes that a win over Davis will make his Hall of Fame Status unshakable.

“If Gervonta and I fight, I will work really hard, a lot better than the Flores fight,” said Santa Cruz. “He will not like my pressure. If it gets passed four rounds with Davis, he’ll get tired and overwhelmed. That will be my plan to beat him.”