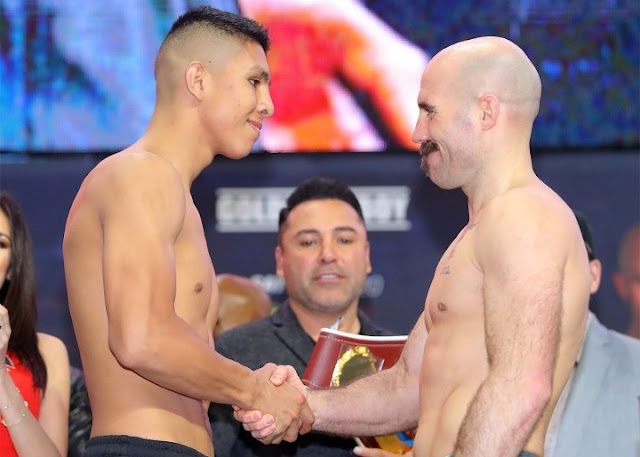 Gary O’Sullivan has taken a big decision in welcoming the former junior middleweight titlist to the middleweight division and in that decision, sees a stepping stone, seemingly blur until he achieves victory against the newcomer. Despite odds and nature, that’s all he wants to achieve on Saturday night.

O’Sullivan plans a devastating welcome for the Unbeaten Mexican, when they both face off in the ring and to make that possible the 35 year old dedicated his Christmas holidays to preparations ahead of his 12-round middleweight clash with Munguia, which takes place today Saturday 11th of January at the Alamodome in San Antonio, Texas.

“I’m not here to test Jaime Munguia, I’m here to beat him,” insists O’Sullivan (30-3, 21KOs)
“It’s been a lot of sacrifice and dedication on my part,” notes the 35-year old from Cork, Ireland who has spent nearly half of his career fighting in the United States. “I recently bought my first home for my family, and I was looking forward to spending Christmas with my family at my new home, but I made a lot of sacrifices and I remained in training camp for the holidays.”

The 24 year old Munguia is unbeaten and plans on making his Middleweight debut after finding it rather difficult to make limits for Junior Middleweight. Having made his mark at the 154 pound division and defending his WBO title five times, he skids off for an adventure a division above.

Gary O’Sullivan has experienced what it takes to be a middleweight and has faced Championship level oppositions. Despite these all have accepted the underdog status given to him throughout the build up and has voiced out much about the fact that all focus is laid on Munguia, his 6 foot frame and what damage he could inflict on a middleweight.

O’Sullivan has only lost to high level oppositions which includes a 12 round decision loss to Billy Joe Saunders in July 2013 after that recovered with six straight wins before getting knocked out by Chris Eubank Jr. and finally got written off after losing via first round knock out loss to David Lemieux in September 2017. He has since then won twice and will stand a chance at reviving his career if he picks up a win Against Jaime Munguia.

“I’m not under no illusion that Jaime is a great fighter, but he should be under no illusion that I’ve prepared really hard for this fight,” notes O’Sullivan. “It’s nothing personal. I really like Jaime, he is a very good guy, very pleasant guy.
“I wish him good health and good luck in his life, but on Saturday night I’m coming for war—and I’m coming to win. And I look forward to putting a great show.”