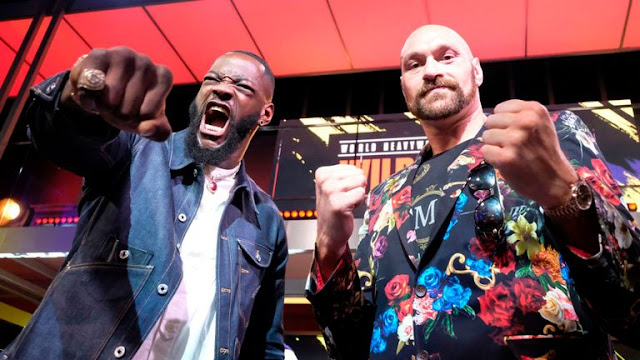 Tyson Fury and Deontay Wilder both met in a promotion for their upcoming fight on February 22nd and while each had a thing or two to say about the other, Wilder baffled everyone with saying that he never felt Tyson Fury‘s punches in the first fight and wonders how he plans on materializing his plan of ending him with a second round knockout.

Deontay Wilder will be defending his WBC Heavyweight Championship in the rematch Against Fury with both coming face to face in a press conference on Saturday Night to promote their upcoming rematch.

Wilder admitted Fury’s plan threw him a little off balance as he has always been the one ending fighters with a swift KO and even went on to claim, that Fury has “pillow fist” and he never felt his punches in the first fight.

“Their strategy? I don’t know how to take it. Are they trying to throw me off my game?
“I don’t know what he will do. He’s crazy, man. If he believes in it, I must take his word for it. But it’s different when you step in the ring. I’m the biggest puncher in boxing history.”

“I don’t think so. We haven’t seen that displayed. I didn’t feel [his power].
“I think Tyson has pillows as fists. He has skill but you can’t have it all.
“Of course, it would play into my game-plan [if Fury aimed for a two-round knockout win] because when you come forward, you give me more momentum to land a shot.”

Fury interrupted with his strategy and said he won’t be giving Wilder his Chin begging him to knocking him out, He is going out there to force him in a back foot.

“If I put my chin in front of him and said: ‘KO me please, Deontay’. I’m hardly going to do that. I’ve got to back him up, put him on the back foot.”

He also opened up about the fact that people hardly feel he is capable of ending the fight with a KO, when he has a resume with 20 KOs out of 29 Fights. Fury also admitted Wilder is one of the biggest Punches in boxing history but says he has the biggest heart and most determined in the heavyweight division.

“I stand by that wholeheartedly. In the first fight I used my boxing skills and it didn’t work. I didn’t win. I’m about winning.
“We’re giant heavyweights and I’ve had 20 knockouts in 29 victories. I’m very capable of knocking people out. When you underestimate someone’s power, you come unstuck.
“He is a much bigger one-punch knockout artist than me. But nobody can match me with heart and determination. I will put my iron will on Wilder.
“I’m not afraid to go mano a mano with the biggest puncher in heavyweight boxing.
“It doesn’t matter if you win 11 and a half rounds against Wilder with 30 seconds left because he can KO anybody.”

After the first fight Tyson Fury and Deontay Wilder went on to win their two Fights in 2019, Wilder knocked out his mandatory challenger Gdhdhdhdj and defeated Luis Ortiz in their rematch in October, while Tyson Fury defeated Tom Schwartz and decisions Otto Wallin.

Fury made a few changes to his camp, replacing Ben Davison with a new trainer, Sugarhill Steward, adding also Jacob ‘Stitch’ Duran to his camp after his bloody fight wit Otto Wallin and that Wilder didn’t fail to criticize.

“Everybody wants to be the head trainer, everybody has the remedy, the right set of ideas. I can only imagine a camp with so many Chiefs” . said Wilder

Fury replied his criticism with the fact that it’s all about business and nothing personal , saying that he needs to have an edge when taking on Wilder in the Rematch.

“I needed to get an edge. It’s not personal between me and these trainers, it’s business. If someone else can improve my business then I’ll bring them in.
“I’m still the same old G. Everybody knows me. There’s not much I can hide. I won’t box like a light-welterweight or like Deontay Wilder. That can’t happen.”