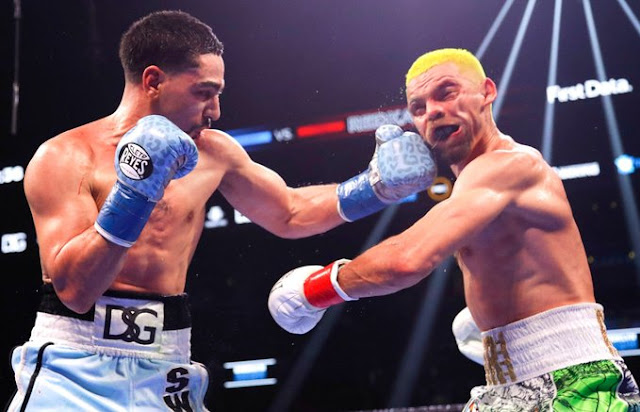 Despite failing to experience the replica of what Garcia will expect from a fight with eight division champion and WBA welterweight champ Pacquiao (62-7-2, 39 KOs) or IBF/WBC champ Errol Spence (26-0, 21 KOs), Garcia will really want his win over Redkach to lead to a world title show down with any of the above named Champions.

“You know, either or,” Garcia told Showtime’s Jim Gray when asked whether he’d prefer facing Pacquiao or Spence. “Either of those fights I would like to have.

The former WBC welterweight champ and ex-WBA/WBC 140-pound champion also believes and seems certain that his opponent Redkach gave him a bite on his shoulder in the ninth round but that wasn’t given attention by the referee.

The 31 year old Garcia was listed a clear favorite by the book-markers and that was how the fight unfolded and Redkach, who has been around for about a decade, did well for himself in avoiding the 3rd knockout loss of his professional career.

Redkach was previously stopped by John Molina Jr. and Dejan Zlaticanin. The fight against Molina Jr. was an absolute spectacle as Redkach dropped Molina in the second round but Molina came back to drop Redkach in the third and fourth round winning the Junior welterweight fight via fourth round knockout.

Zlaticanin, who was then undefeated, dropped and stopped Redkach in the fourth round of their lightweight Bout.

Before the fight, Garcia dropped veteran Adrian Granados three times end route to a seventh round stoppage victory in their April 20 fight at Dignity Health Sports Park in Carson, California. Granados (20-8-2, 14 KOs, 1 NC) was never knocked out prior to fighting Garcia.

Redkach was able to land a high profile fight with Danny Garcia after making his Welterweight debut with a stunning knockout victory that saw Redkach drop Devon Alexander three times in the sixth round before stopping him in their 10 round fight.