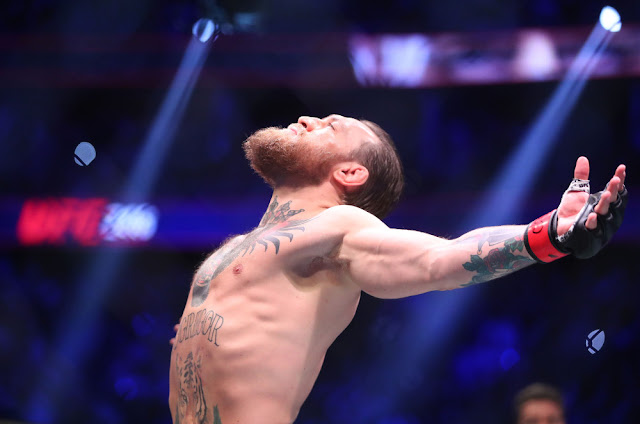 The UFC President Dana White has after the UFC 246 main event spectacle, has compared the Irish MMA star to Boxing legends Muhammad Ali, Sugar Ray Leonard and Mike Tyson after the 40 Second demolition of Donald Cerrone.

With all the expectations and expert predictions ahead of the Fight, Mcgregor totally dominated Cerrone and allowed the veteran contender just two opportunities to strike before eventually dropping him to the canvas and forcing the stoppage to earn victory in his comeback and welterweight debut.

Dana White believes that with such a dominant victory and all he has achieved, Mcgregor has earned his place among Boxing greats such as Ali,Mike Tyson and Leonard in the MMA community.

“[Conor] is such a huge superstar. I put him up there with Tyson, Leonard,” White told a media conference.
“All of them,” he added when asked if McGregor could be compared to Ali, considered to be the greatest fighter in boxing history.
“He’s got the biggest pay-per-view in pay-per-view history. How many of the top 10 does he have? I don’t even know. He’s one of the biggest stars out there.
“A lot of the times coming in his career he’s been doubted for his talent and he proves everybody wrong every time.”

There was a big doubt surrounding the build-up on Mcgregor could pull off a big return to the Octagon after staying away for so long but that all seemed like nothing, when he pulled of the stunning stoppage victory and Dana White believes that such a performance is totally priceless and no number could be place on his worth to the UFC.

“Two billion dollars? Sounds like a good number, I’ll take that,” White joked. “I don’t know what he’s worth to the company but it’s big.
“You couldn’t go anywhere without seeing this fight and knowing that this fight was on. All the people came out and watched the fight.
“This is one of those fights that people who normally don’t buy [do] buy, right? So, the number is always massive.
“Then Conor comes out and does what he did tonight. You can’t put a number on that. It’s massive and it’s global. The whole world was watching tonight.”

After the big win against Cerrone, Mcgregor made clear his intentions of fighting the UFC Lightweight Champion Khabib Nurmagomedov in a mission to get revenge for the fourth round submission loss his got on his record back in UFC 229 and that’s part of what the UFC president has on his agenda.