Claressa Shields – Am About To F-ck Ivana Habazin Up 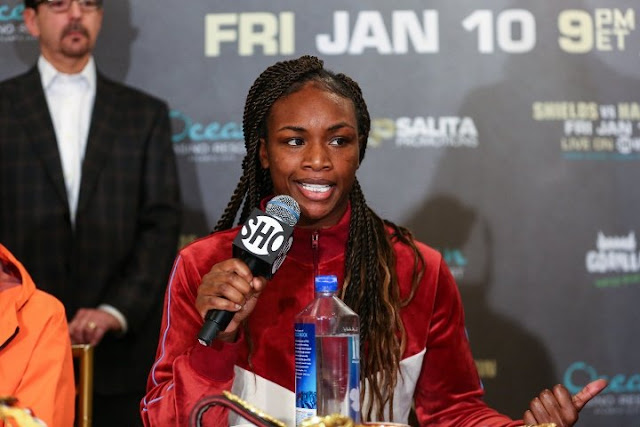 Claressa Shields will be dropping six ponds on her a way to winning a world title in her third weight class against Ivana Habazin and will be hoping to be the first to attain such a feet in just 10 fights. However, She has had an increasing number of criticism lately because of her very low amount of KO victories.

Claressa Shields is Undefeated but has only been able to score two knockout victories in her nine professional fights. Defending herself, the former undisputed middleweight champion mentioned a few undefeated fighters she has defeated and said she has always been in the ring against high level opponents and will definitely finish Habazin off the proof that.

“When you talking about getting knockouts,” Shields said, “and then being faced against the opponents that I’m faced with, if you would’ve gave me tomato cans to fight up on Showtime, I would have nine knockouts on Showtime. If you look at who I fought, Hanna Gabriels. Who she been knocked out by? OK. Then you talk about Tori Nelson – 17-0 when I fought against her. Who knocked her out? Nobody. I beat her. We talk about Christina Hammer, 24-0, 11 knockouts. Who beat her? She was undefeated. So, when people put the pressure, ‘Oh, you supposed to be knocking girls out,’ no I’m not. I’m supposed to go in there and beat ‘em.
“And technically, I woulda got the knockout on Christina Hammer, but she kept holding me. It’s not my job to be the ref. That’s the ref job. And that ref [Sparkle Lee] also apologized to me about not doing her job correctly. So, when you talk about getting knockouts, you’ve gotta put the facts in there and who I’ve been fighting. I was 3-0 fighting against a girl 15-6. What kind of athlete do you see doing that? So, when you talk about knockouts, no, I had to learn how to be a professional fighter.”

In her last outing, Shields defeated the more experienced Christina Hammer(24-1, 11 KOs, 1 NC) Via huge margins on all three scorecards (98-91 x2, 98 – 92) to unify her WBC, IBF, WBO and WBA middleweight titles back in April 13 at Boardwalk Hall in Atlantic City, New Jersey.

Shields returns to her hometown to face another unbeaten fighter Ivana Habazin (20-3, 7 KOs), who is very experienced and a big puncher at the Junior Middleweight division in her bid to claim the Vacant WBC and WBO 154 Pound Championships.

The 24 year old said she and her trainer John David Jackson have been working on her punches and credits the lack of exposure in Her Amateur career for her struggles in her professional career. She however, promised to finish of Habazin in spectacular fashion and by that she meant a knockout. A result that has been used to taunt her throughout the build up to this fight.

“Me and my coach have been working on me making sure that I place my punches, land ‘em and not just throw ‘em with speed,” Shields said, referring to trainer John David Jackson. “Because when I first turned pro, they was saying that I was throwing over 150 punches in two minutes. They was saying that if I was to be a male fighter and I was to box three minutes, I would be throwing over 125 punches [per round]. So, with that, we slowed the punch count down. We’re gonna aim our shots, we’re gonna take our time and now I’m just more comfortable without fighting in the headgear. In the Olympics, the women have to fight with headgear in the amateurs, when the boys don’t. So, I was never used to, first off, getting head-butted, getting elbowed, all that, without the headgear.
“So, now that I’ve learned that it will be a knockout. That’s why I got close to knocking out Hammer. And I’ve stung every girl that I’ve fought, every girl. … But if I was to box three minutes, you can add four or five more knockouts that I would have. We’ve only got two minutes to do work. So, with the two minutes, I go in there and do what I can. But all my fights have been dominant. I haven’t even had a split or a majority decision. So, knockouts don’t matter. What matter is a ‘W.’ But this fight, I’m gonna Deontay Wilder her for sure. Call me a bully now, because I’m about to f*ck her up.”

Ivana Habazin was knocked out by Mikaela Lauren (32-6, 13 KOs), a third round technical knockout in their WBC junior middleweight title fight.

The Shields Vs Habazin fight will be the headlining bout of a Showtime tripple header scheduled for Friday night at the Ocean Resort Casino (9 p.m. ET/6 p.m. PT).