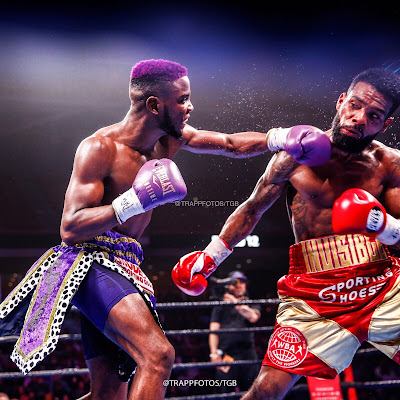 Chris Colbert who dreams of securing a world title fight against Leo Santa Cruz before the end of 2020 took a major step towards that direction with a spectacular performance that saw him drop former champion Jezreel Corrales in the 10th round and went ahead to win a 12 round unanimous decision over former champion Jezreel Corrales and the WBA interim 130 pound Championship on Julian Williams Vs Jeison Rosario at the Temple University’s Liacouras Center on Saturday night.

Both fighters started the fight feeling each other out and at 1:10 minutes into the fight Corrales fell to one knee but the referee rolled it a slip. More of the same in the second round but Corrales was able to land a big right hand towards the closing seconds of the second round.

Both fighters came forward in the third and ended up wrestling for position. Colbert was able to land a good counter left that knocked Colbert’s head backwards after the midway point of the third and the lack of action in the fourth round drew boos from the crowd.

Colbert landed a couple of combinations in the eight round which sent Corrales backwards but that didn’t seem to hurt Corrales before both ended up trading left hand before the round ended.

In the 10th round, Colbert dropped Corrales with a right hand that grazed the top of his head and the referee correctly called it a knockdown and in the eleventh round the  Colbert forcefully sent Corrales tumbling outside the ring.

By the 12th round it was pretty clear Corrales needed only a KO to defeat Colbert and as there wasn’t much action, the fifth ended in favor of the younger and energetic contender.