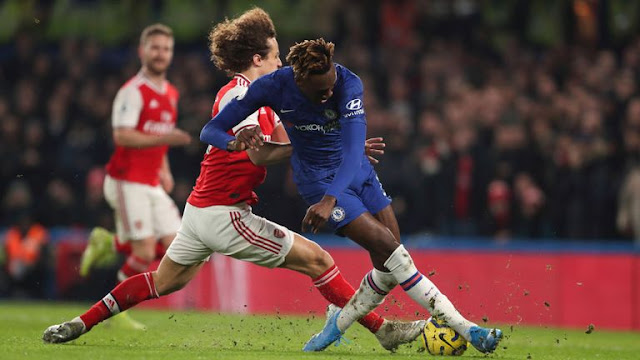 Ten men Arsenal FC came back twice against Chelsea FC at Stanford Bridge to steal a crucial point despite been outnumbered and dominated for most of the game.
Watch Video Highlights Below

Goal : Jorginho 1-0 (Penalty)
Chelsea FC take lead as Jorginho steps up to the spot and buries the shot behind the net
Goal : Martinelli 1 – 1
The Gunners go leveled after a Chelsea, who have dominated play for the last five minutes lost play and gifted Arsenal an opportunity to counter, the ball falls into Martinelli feet and he tells up with Lacazethe before the Brazilian faced Kante was who slipped while attempting a tackle.

The Youngster maintained his cool racing from the middle down to the Chelsea box before slotting the ball past Kepa to level the game.

Goal :2 – 1 Azpiculeta
Chelsea FC take the lead ones more after a short pass is played to Hudson-Odoi, who crossed was finished of from a very range by Azpilicueta with a sliding effort.

Goal : Bellerin 2 – 2
The Lead only lasted three minutes as 10 men Arsenal leveled the game from nowhere. Bellerin picks the ball close to the Chelsea box, Cuts the ball into the box before curling the ball past into the net.

Chelsea VS Arsenal
to Stanford Bridge on Tuesday night with hopes of getting back to winning ways after losing by a goal to nil against Newcastle in their last outing.
The Gunners will look to take advantage of a perfect opportunity to carry out revenge on their London rivals after watching their 1-0 lead disappear and eventually become a 1 -2  defeat at the Emirates Stadium back on Dec. 29th.
Mikel Arteta and his men have only one victory in their last Seven games and will try hard to avoid a loss as that will be detrimental to their European qualification goals. The Gunners sit 10th on the Premier League Table and battled to a 1 – 1 draw with visitors Sheffield United in the weekend.
Frank Lampard and his Boys were the first to hand Mikel Arteta‘s Arsenal a loss and another win over the Gunners will further solidify their position on the Premier League table, taking them eight points above fifth place Manchester United.