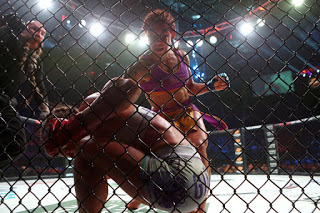 Cris Cyborg made a big debut on Bellator 238 with a stunning stoppage victory over Julia Dudd in the Headlining bout this past weekend at The FORUM.

Cyborg made history as the only fighter to to win a world title in four different MMA promotions in the modern MMA era, having previously won titles in the now dissolved Strikeforce, Invicta FC , and the UFC in the past.

Julia Dudd put up a real fight, showing the former UFC Champion, a reason why she ruled the division before her Arrival but Cyborg was ready and gradually broke her down till when she had a clear opening to land her flurry and magnificently finished her off in the opening minutes of the fourth round.

Dudd entered the fight on an eleven fight winning streak, which go snapped by the defeat and lost with it the title she won as the inaugural champion. Cris Cyborg on the other hand was making her promotional debut after departing the UFC. She has now won two fights since her long championship reign in the UFC got snapped by Amanda Nunes.

Dudd showed a lot of energy in the opening rounds but gradually slowed down as the fight wore on and eventually lost it while Cyborg confirmed her championship resumed and kept the intensity till she got the win.