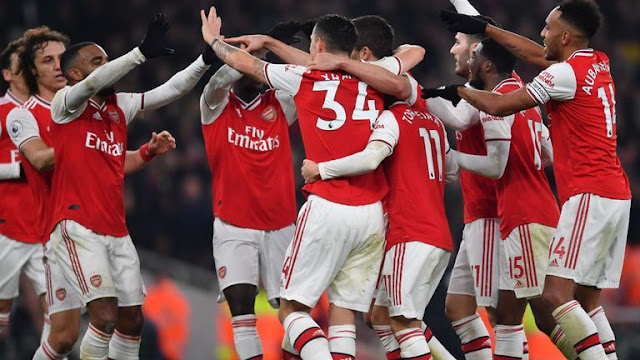 Arsenal FC pick up their first Premier League win under Michael Arteta and forged their way into the top ten of the Premier League Table with a 2 Nil victory over Manchester United at the Emirates Stadium.

Arteta has so far transformed Arsenal into a more disciplined side and more tactically dangerous upfront as they found themselves leading in just eight minutes with a nice finish from the very impressive Nicolas Pepe and doubled their lead in the 42nd minute when Sokratis finished off from close range.

Manchester United came to life in the second half and pressed Arsenal into the box for majority of the second half but that was all they could do as The Gunnars maintained their grounds days after losing to Chelsea FC, they held on to win with a clean sheet.

Arsenal FC are now 10th and stay six points from the top six with the win while Manchester United recent climb on the Premier League Table will now be delayed by the loss and they sit four points behind Chelsea FC in fourth position.

Arsenal FC have had so much issues this season and have won just one of their last fifteen games this season and against Chelsea they succumbed at the last minute but against Manchester United, they maintained order defensively to secure the win.

Both teams will now turn their plans towards the FA Cup third round  where Arsenal will host Leeds United on Monday and The Reds will travel to Wolves on Saturday.