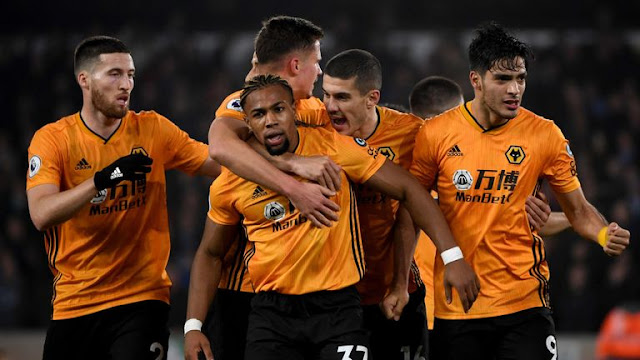 Wolves executed a perfect comeback victory against Premier League Champions Manchester City after watching their visitors go two goals ahead at the 50th minute at the Molineux.

Ten Men City were dominant despite seeing their No. 1 goal keeper Ederson leave the field as early as the 12th minute. City eventually got ahead 13 minutes later and got the lead doubled in the 50th minute but that didn’t stop Nuno Espirito Santo‘s men from pulling off a late rally that saw them seal a 3 – 2 win.

Raheem Sterling gave City their two goal lead but saw the two goal lead vanish gradually, first Adama Traore scored pulled back one for the host then made himself an architect by assisting Raul Jimenez to level the game in the 81st minute. However, towards the closing minutes of the game  Matt Doherty sealed the win for Wolves.

The Game was filled with a lot of debatable decisions by Var from which resulted in two less deserving Penalties, twice taken by Raheem Sterling and twice saved by the Foxes No. 1.
With the win, Wolves climb up to fifth position with 30 points, while the Manchester City will remain third on the Premier League table and are now 14 1 points behind League leaders Liverpool FC