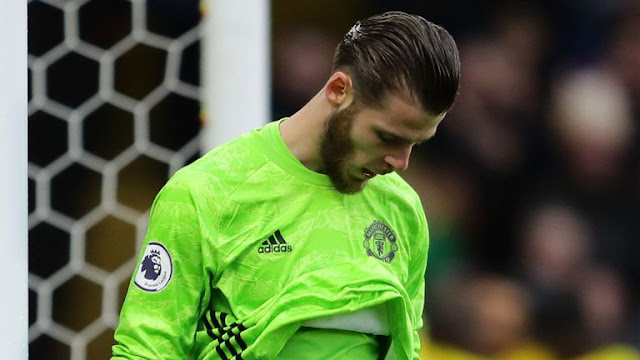 Watford clinched their second win of the season with a stunning 2 – 0 victory over sloopy Manchester United at Vicarage road on Sunday.

Manchester United had better chances of finishing the first half ahead but Martial and Lingard threw away the best chances away, ending the first 45 minutes without a shot on target from both sides.

Watford as United were equally awful with possessions giving them away easily in the first half and many would expect something different in the second but there were more mistakes and erroneous passes especially from the Red Devils in the final third.

However, Watford made Manchester United pay for their sloppiness, when an improperly cleared corner landed in front of Ismaila Sarr’s who played a one time volley which should be easy for David de’Gea to catch but the Spaniard fumbled and gifted Watford the lead.

Ole Gunnar Solskjaer made a few changes after the goal in a bid to boast the team but Wan Bissaka also had a bad day clearing down the goal scorer four minutes after in the Penalty Box, another gift for the second goal. Deeney made no mistake from the spot.

Paul Pogba was introduced into the squad and United pushed and got close to earning an equalizer but that was all, as Watford seemed too organized defensively for United To break.

The game however ended 2 – 0 In favor of Watford, who still sit at the bottom of the Premier League table, with just 12 points accumulated all season. Manchester United drop to 8th on the League table after the eighteenth game and have now lost five matches this season.

[…] Ethiad Stadium, three weeks ago. They have since picked up a 1 – 1 draw against Everton and a 2 – 0 loss against Watford at Vicarage Road on Sunday.The Toons recovered from their 1 – 0 loss to Burnley with a win over Crystal Palace this on […]