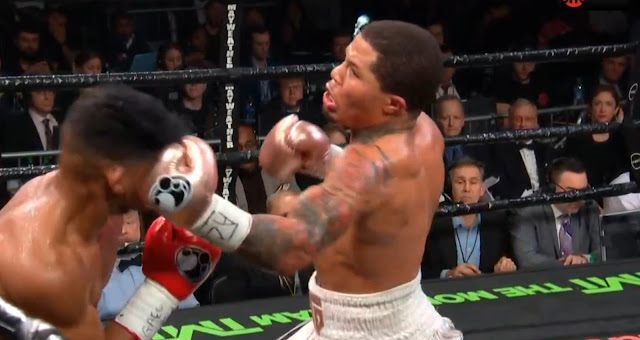 Round ONE :
Davis too fast for Gamboa comes out aggressive and landing lefts straight lefts easily, as that seemed to be a huge problem for Gamboa who was quickly put on the back foot  countering all the way.
Davis took the first round 10-9

Round 2
Davis continues from his work in round one but there seem to be and issue with Gamboa’s shoes. It looks as if Half of the sole on one leg is completely separated in two. Davis Drops Gamboa in the second round

Round Five
Davis still dominant as hell, as it seem Gamboa is now having more issues with his with his legs around the ankle but Mehn.. Davis just kept the shots landing and those upper cuts have been connecting. However, its a surprise Gamboa is still standing.

Round 8
So much about surviving ,Davis Dropped Gamboa again

Round 10
Davis looks a little gassed after his Knockout campaign in the last few rounds .. However Gamboa still stands and Davis is still out there landing power shots that is supposed to knock Gamboa Out but he still stands..surprisingly.