UFC On ESPN 7 – Rozenstruik Stuns & KOs Overeem In Last Round 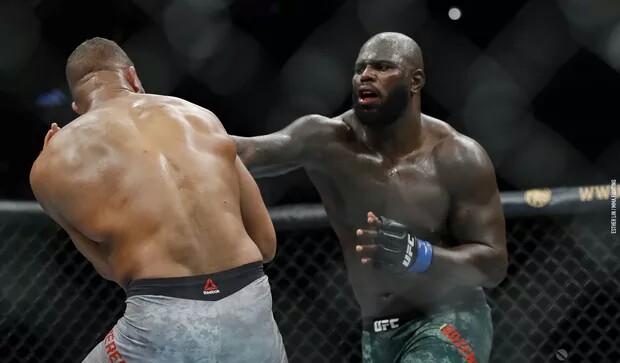 Jairzinho Rozenstruik made a wonderful comeback on Saturday after losing the first three rounds against Alistair Overeem, ended the fight with a reel highlight KO with just four minutes left in the fifth round of the UFC on ESPN 7 Main Event at the Capital One Arena In DC.

Rozenstruik landed a two hand combination in the fifth round, first a huge right hand then a huge left hand that sent Overeem stumbling to the canvas. The Suriname native just walked away after those combinations as though the fight had ended but the fight actually ended after Overeem reached his feet and collapsed again, forcing the referee to wave off the fight.

Overeem opted for takedowns in the first few rounds with the technique basically to avoid the power of Rozenstruik while battling on their feet. Overeem fired at Rozenstruik with short blows and elbowse dominating the fight with his ground game.

Overeem basically broke through Rozenstruik’s defense and sent him into survival mode when they both hit the canvas but while on their feetf he made Overeem pay while standing but seemed to be saving his energy for the final rounds and threw punches one at a time.

Rozenstruik finally took over the fighting the fourth round, landed combinations to the head,  body and some knees that forced Overeem cornered to the wall of the cage, eventually winning the round.

Then with seconds remaining Rozenstruik blasted Overeem with some dangerous combinations that ended the fight with just seconds left in the fifth round.