Skip to content
HomeSports NewsUFC On ESPN 7 Preview And Results : Overeem Vs Rozenstruik

UFC On ESPN 7 Preview And Results : Overeem Vs  Rozenstruik 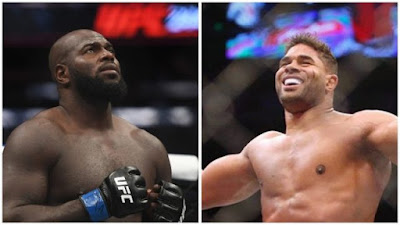 The Ultimate Fighting Championship (UFC) hits Washington DC with UFC on ESPN 7 headlined by to Heavyweights Alistair Overeem vs. J. Rozenstruik at the Capital One Arena this Saturday 7th of December, 2019.

Overeem will be drawing confidence from the two straight victories from his last two outings, which include victories over Sergei Pavlovich and his April victory over Alexey Oleinik at UFC St. Petersburg . Rozenstruik on the other hand is presently unbeaten with a 9-0 record and 3-0 in the UFC. He is going into the fight on the back of a 29 second knockout victory over Andrei Arlovski at UFC 244 one month ago