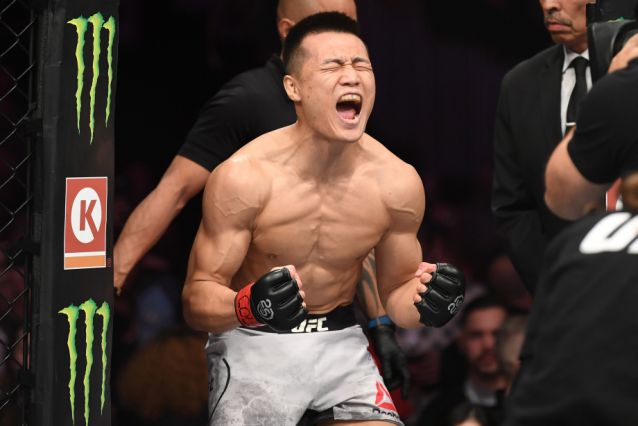 Chan Sung Jung A.K.A. the Korean Zombie get an opportunity to make his country proud when he takes on Frankie Edgar in the Main Event of UFC On ESPN+ 23 at the Sajik Arena in Busan on Saturday 21st December.

The former lightweight champion and Octagon  veteran Frankie Edgar stepped in on short notice after Brian Ortega pulled out of the fight due to a knee injury. He is coming off a unanimous decision loss against former featherweight champion Max Holloway.

The Korean Zombie is coming off an impressive 1st round  KO victory over Renato Moicano In UFC Greenville main event but before then got knocked out by Yair Rodriguez in UFC Denver. However for this fight, he is considered by bookmarker a favorite.

Sung Jung might be looking to use his pressure fighting and striking to get the better of Edgar, who definitely would be out to use his ground game against Jung but Jung has a very good Jiu Jitsu game and his striking sees me giving him a decision victory for the fight.

In the Co-main event, knockout artist Volkan Oezdemir will be out to stop the quickly rising Aleksandar Rakić in a light heavyweight bout.