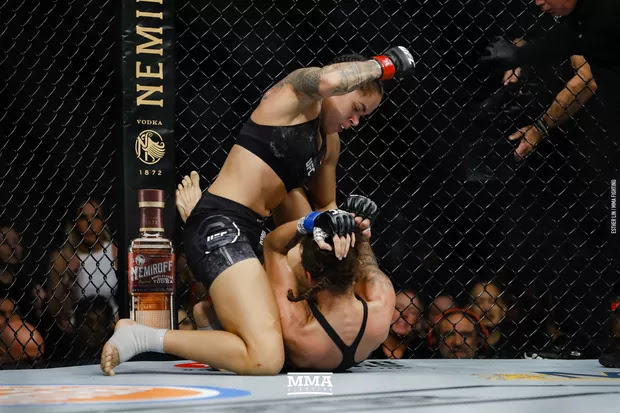 Nunes started the fight with great tempo and continued attacking her challenger throughout the fight with grappling her superior grappling skills, take down and submission attacks to earn a unanimous decision victory (49-44, 49-46. 49-45)  after five rounds.

Early in the first round Nunes blasted de Randamie with a powerful right hand and from then on followed everything with a continuous take down attempts and when successful tries to ground and pound. De Randamie was in survival mode throughout the first round, as Nunes kept changing from Ground N Pound to Triangle Choke.

De Randamie fired back in the second round, landing a pair of shots that snapped Nunes head backwards in succession then followed it up with a stunning kick and a series of knees that forced Nunes in a tight corner.

Nunes was constantly been taken apart on her feet, so she choosed to use her grappling skills, which is far better than that of de Randamie and constantly had the challenger in defense mode whenever they both take the fight to the canvas. She chopped de Randamie away with punches, elbows and submission attempts, thereby accumulating points through the rounds.

Nunes fired throughout the fight and in the last two rounds started looking gassed but de Randamie wasn’t able to beat her grappling and inevitably lost her chance to win the fight on score cards.

The exception performance earned her a loop sided decision and leaves a huge question mark on what’s next for the Champ.

“I want to show something different. I want to show I have wrestling and jiu-jitsu as well,” Nunes said after her latest win. “Tonight I proved it, I’m ready for five rounds. Let’s do this again.”