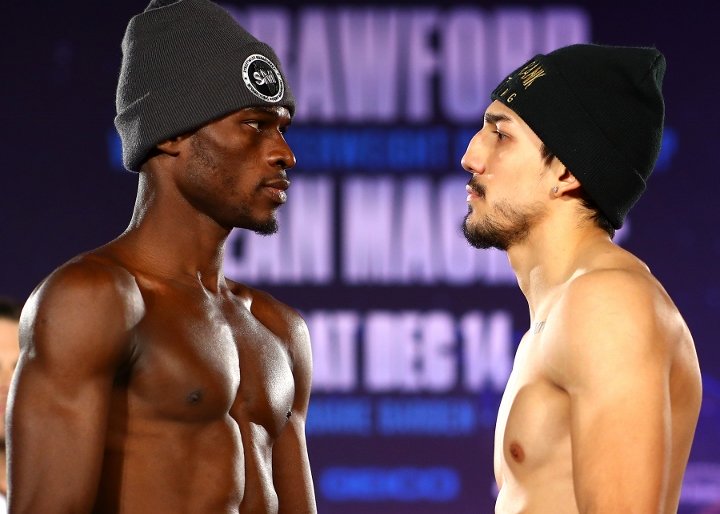 Teofimo Lopez Jr., who is considered by many to be one of the next rising stars in boxing Will be working inro his first title fight on Saturday against Richard Commey on Crawford Vs  Kavaliauskas Undercard but believes, he will only be considered an elite fighter when he defeats a world champion.

The undefeated Lopez (14-0, 11 KOs) goes into the biggest fight of his professional career against IBF Lightweight Champion Richard Commey (29-2, 26 KOs) on Saturday at Madison Square Garden in New York.

The champion Richard Commey is going into the fight as an underdog despite facing much better and bigger names than Lopez.

“This is it,” Lopez told BoxingScene.com. “I know it’s big. This fight right here changes everything. And I know that.”

The Mandatory Challenger has done so much changes in his training and made measures to aid his concentration, first by moving his camp from Las Vegas to rural Flemington, New Jersey, near the Pennsylvania border, trying his best to prepare appropriately for the fight.

He has also brought in former two division titlist Joey Gamache to his camp, a move he believes has brought more stability to his training.

“I’ve been pushing myself more than I usually do,” Lopez said. “I’m getting in the work I need to get. After sparring, I would usually do my sit-ups and that would be it. I’m doing so much more after sparring. I’m just pushing myself to that limit. I know these are the championship-caliber fights I’m gonna be into. I’m gonna be the first Honduran champion and bring back the belt to all of Central America. So, this is a real big fight, man.

“It’s a huge opportunity for me and what better way to end the year, but on Heisman Trophy night, on ESPN, the best platform out there. I think overall, man, it’s gonna be a hell of a night. After this fight, we’re on to, hopefully, the Lomachenko fight in early 2020. So, you know, we finish [2019] with a bang and we start [2020] off with a boom.”

Richard Commey Vs Teofimo Lopez is part of the Crawford Vs Kavaliauskas triple header, which kicks off at 9pm ET on Saturday 14th December.