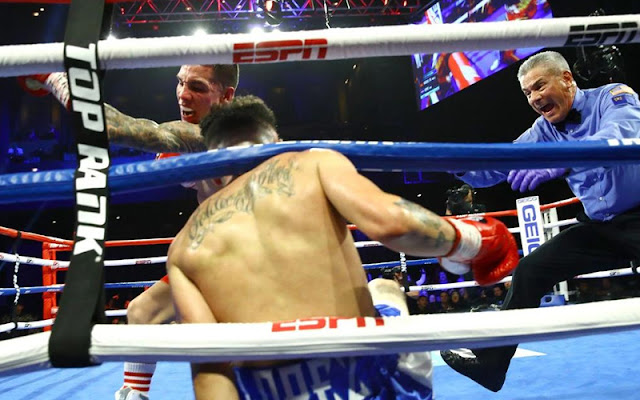 Former super featherweight champion Oscar Valdez earned himself a possible title shot with an exceptional performance that saw him climb off the canvas, score two knockdowns of his own on the way to a seventh round knockout victory on Saturday night at The Cosmopolitan in Las Vegas, Nevada.

After being down in the 2nd and likely down on the cards, Oscar Valdez (27-0, 21 KO’s) TKO-7 the very late sub and very game Adam López (13-2) in Las Vegas. Perhaps stopped slightly too soon with 7 seconds left in the round.

The late replacement Adam Lopez gave his all to the fight but was no match for the well tested Valdez, who was able to force a stoppage at exactly 2:53 of the seventh round, hammering continually till referee Russell Mora jumped in to stop the fight.

Lopez came in as a late replacement for Andres Gutierrez , who during the weigh-in came in 11 pounds above the weight limit for their 130 pound fight, which prompted the  Nevada State Athletic Commission to automatically kick him out of the scheduled headliner, opening doors for available opponents.

Lopez was initially scheduled to face Luis Coria in an eight round fight but abandoned the fight and stepped up for a chance at a bigger glory and a once in a life time opportunity.

Lopez started out Jabbing and tried using his space as set down by Hall of Fame trainer and former two-division champion James ‘Buddy’ McGirt but this was disorganized by Valdez, who surged forward, found his way into him and drilled Lopez.

The second round Valdez fired furiously at Lopez with hopes of working him down and maybe force a stoppage but that wasn’t case as he was caught by a hook that sent him stumbling to the canvas. He was able to beat the count and need to fight back as he was now trailing on the scorecards.

“I just got hit,” Valdez (27-0, 21KOs) admitted to ESPN’s Crystina Poncher after the win, “Credit to Adam Lopez, he’s a warrior just like his father (the late Hector Lopez, a former 1990s contender) was.

“This is boxing. I prepared myself for two, three months for Gutierrez, but that’s no excuse. This kid is a warrior.”

Valdez recovered from the knockdown in round three, regained control  and began controlling the fight. He made Lopez miss with his movement and offering his attack using unbelievable angles to the amazement of the spectators.

Round four witnessed another turn around as Lopez was advised by Mcgirt to constantly maintain contact with the former featherweight champion, especially when preparing for an attack. This gave him some advantage on the scorecards and even led the fight on until the questionable stoppage.

Valdez fired on and in the seventh round was pressured Lopez to the ropes landing uppercuts, then a straight right hand, followed by a left that sent Lopez crumbling to the canvas. He made it to his feet before the referee was done counting but wasn’t able to regain grounds in the fight.

Valdez forced Lopez backwards with a flurry of attacks which prompted the referee to jump in to stop the fight at exactly seven seconds remaining in the seventh round of the ESPN headliner.

“He hurt me, but I was fine,” insisted Lopez, who snaps a five-fight win streak in falling to 13-2 (6KOs). “I was blocking shots. He caught me one time and the referee stopped it. There was seven seconds left, I was ready to come back.”