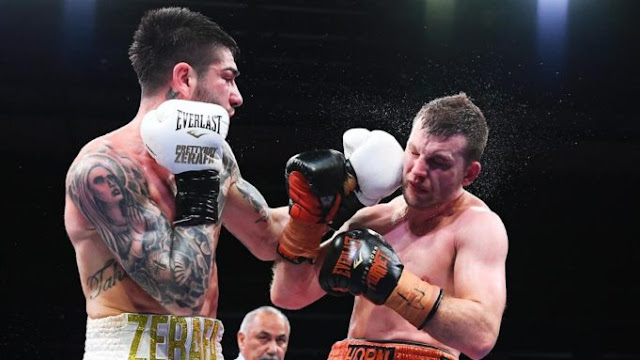 Michael Zarefa is pumped up for another victory over former WBO welterweight champion Jeff Horn and this time, He is taking it personal and looks forward to ending Horn’s career when they meet on the 18th of December at the Brisbane exhibition and convention centre.

Zerafa (27-3 , 16 KO’s ) outworked and stopped Horn 19-3 ( 13 KO’s ) in their first meeting back in August 31st and believes that the rematch will definitely end in the same fashion as He sees nothing competitive in the former welterweight champ.

“Confidence is running high, camp has been perfect, I’ve lifted a few levels since beating Horn. I’m going to walk straight through him and stop him early, he’s got nothing!” said Zerafa.

During the press conference ahead of the fight, Michael Zerafa made clear everything he felt about the rematch and how the rematch clause triggered by Horn and his team, directly hindered his taking up a very lucrative fight with Ryota Murata which would have WBA “regular” middleweight world title at stake. According to him, the rematch is definitely personal and he looks forward to ending his career.

“I beat him easy the first time! Rematches are for close or disputed fights. Horn is a sook and I’ve spent every day since then focused on putting his boxing career away for good. Mark my words, I will retire Horn December 18,” Zerafa stated.
“Horn’s team think they know what they’re doing but they have no idea! Everybody in boxing knows, the media knows, the fans know, but Horn and his team still cannot figure out that he’s not a middleweight,”.
“All I want right now is Horn. He’s made it personal. He could have been a good guy and let me go make some big money. I agreed to fight him after the Murata fight but he started sooking so I’m going to make him pay, I’ve lost all respect for him, this is personal!”

Jeff Horn will be looking forward to reviving his career after suffering two loses in three fights, with his win over Anthony Mundine being his only win right between his losses to Terence Crawford and the first fight with Michael Zerafa.