Maurice Hooker Overwhelms Late Replacement Uriel Perez In One Round 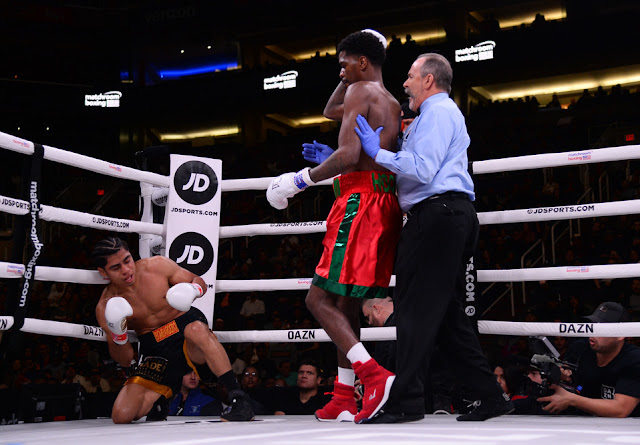 Former 140 pound world champion Maurice Hooker blasted out late replacement Uriel Perez within one round, making it back to the win column on Jacobs-Chavez Jr undercard on Friday night at Talking Stick Resort Arena in Phoenix, Arizona.

Hooker needed just 2 minutes 52 seconds to dispatch Perez, dropping him with a right hand and that was it, as his opponent couldn’t continue, prompting the referee to stop the fight. the fight was his first fight since losing to Jose Ramirez a WBC, WBO unification battle earlier this year.

His loss to Ramirez was the first of his professional career and that prompted some changes to his team ahead of the fight. The changes included Brian ‘Bomac’ McIntyre’s introduction to the team. Bomac is known for his work on Three division champion Terence Crawford.

Maurice Hooker didn’t get much of a resistance as Perez was so over matched and didn’t offer much with his little effort eventually ending with a right hand to the body. He had initially complained of fouls but after the body shot complained of severe rip pain and could barely beat the count forcing the referee to stop the fight.

However, Hooker was happy with his performance and victory though admitting there was little action, giving himself some credit for possessing one of the “best Jabs in the boxing”

“Tonight I didn’t show you all much but it was just about getting everything ready,” Hooker said after picking up his second win of 2019 “When I hit him with a body shot, I came back and hit him on top of the fight. I was hitting him with my jab, nobody can mess with me. I got the best jab in the business.”

Having taken care of the 24 year old Journeyman Perez, Hooker will love to face one of the reigning champions in the division when next he finds himself in a boxing ring and made clear he wants his belt back but that might be better, if unified titlist Josh Taylor give him a crack.