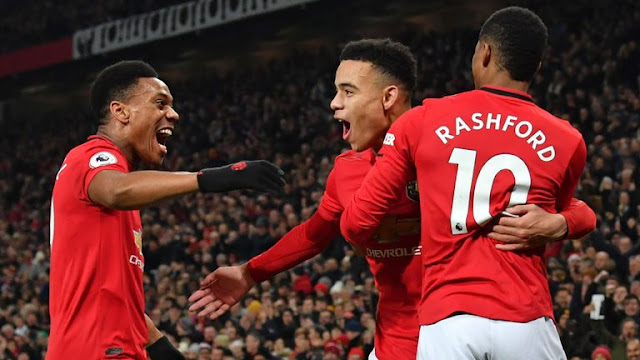 Manchester United made a very spectacular response to their 2 nil loss to Watford with a 4 – 1 win over comeback win over Newcastle United at Old Trafford on Boxing day.

Ole Gunnar Solskjaer’s men were again found trailing when a quick counter had Langstaff played through for a one on one chance with David De’Gea and slotted home perfectly to give the visitors a lead in the 17th minute.

However the lead will only last for seven minutes, as Martial got Manchester United leveled after Shaw made some good run down left before finding Andreas Pereira and he plays in Martial, who scores with a low shot.

The Red Devils then doubled their lead after Mason Greenwood got the ball from under pressure Fabian Schar, who passed an error pass into his feet and the youngster send a thunderous one time shot past Dubravka to complete the Comeback.

However the lead wasn’t enough for the Red’s and they added another goal Just before the end of the first 45 minutes. The third goal started out with a foul call from the Toons after Matty Langstaff went down following a clash with Scott Mctominay but the referee allowed a play on which allowed Wan Bissaka continue with his run ending it with a cross to Rashford, who scored his 11th goal of the season.

Paul Pogba came on for the host during the second half but it was still Martial, who still stole the spot light after intercepting a sloppy pass from Matty Langstaff taking a run towards Goal before raising a shot above Dubravka to score hia second for the night.
He came very close to scoring a Hat Trick but his long distance low shot at the Hour Mark only rattled the foot of the post and fizzled out. The remaining part of the game where practically less eventful and the only tragic part of it was Scott McTominay leaving the pitch on clutches.
Solskjaer was definitely happy with the result and had a few things to say concerning the three goal scorers and the magnificent Mctominay.

Manchester United boss Ole Gunnar Solskjaer said: “McTominay has done his ligament in the knee, probably. I don’t know how bad it is. The boy has got the biggest heart of the lot. We’ll find out tomorrow how it is.“Mason (Greeenwood) is a great striker of the ball. You know he is going to hit the target more times than not. The way he strikes it is nice to see and he is so unfazed by whatever happens.“The three of them are a handful when we can get the space we did today. These boys will never give up, this club knows that towards the end we can nick a point or even three from losing positions.”