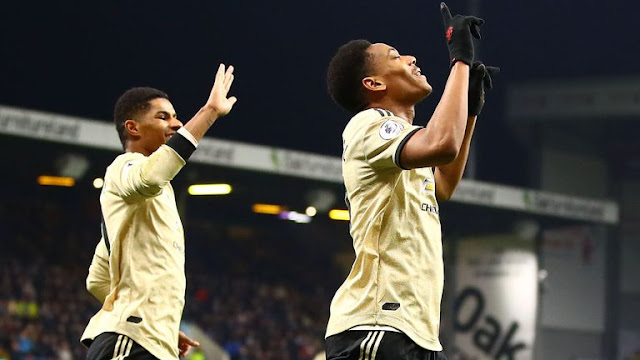 Manchester United defeated Burnley at Turf Moor to climb fifth on the Premier League Table, having defeated four out of their last six opponents.

The Red Devils dominated the game throughout the first 45 minutes and were able to break the deadlock at the 44th minute when  Charlie Taylor made a game changing mistake, allowing Pereira sneak away with the ball, then setting up Martial, who with composure sent the ball behind the keeper.

After the goal, Burnley gradually grew into the game but didn’t shoot any shot on target till the 60th minute and from then on, began threatening to level the score line with Phil Bardsley forcing a save from the United No. 1 David De’Gea. However, after wasting a couple of chances, United finally doubled their lead during added time.

Marcus Rashford got played through by Daniel James and he, found in a one on one chance took the ball around the Keeper before sliding the ball into the net behind the anticipating defender.

Manchester United are now fifth on the Premier League Table, sitting a point behind fourth placed Chelsea, who will have their fate decided with against Arsenal on Sunday. Burnley on the other hand Burnley remain thirteenth on  the PL table with just six points above the relegation zone.

There was a huge controversy over the absence of Paul Pogba in the starting line up after appearing in the last two games as substitutes since his return from injury.

[…] term plans during the January transfer window and Fernandes actually fits the bill due to his age.Manchester United defeated Burnley 2Nil in their Premier League visit to Turf More on Saturday. A win that sent the Red Devil’s fifth on the Premier League table and will now shift their […]