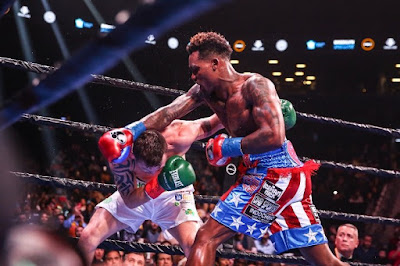 WBC Middleweight Champion Jermall Charlo showed Denis Hogan exactly why he was considered a favorite while heading into his first title defense since made a full champion by the WBC.

The heavily favored Charlo (30-0, 22 KOs) retained his crown by dropping Hogan twice in the fourth round and in the seventh round before the fight was stopped by the referee in the 7th round of the scheduled 12 round bout.

“I wanted to keep going, but the decision was fair enough by the referee,” said Hogan, who moved up from 154 pounds to 160 to challenge Charlo. “I didn’t see the punch coming on the second knockdown. I was trying to keep boxing him, but then, all of a sudden, I was on the ground and the fight was over.”

Charlo, who dominated all the rounds in the fight said the big punch landed due to calculated instructions from his trainers and definitely landed it at the rightly to knocking him down to his butt.

“[Trainer] Ronnie [Shields] told me to cut him off,” Charlo told Showtime’s Jim Gray regarding the punch that ended the fight. “I just threw the shot and I made sure I threw it right on the money.”

Denis Hogan landed the shot at Charlo’s middleweight title due to his huge performance against former WBO Junior Middleweight Champion Jamie Munguia in April, a fight that saw him lose a majority decision, however the result was considered controversial.