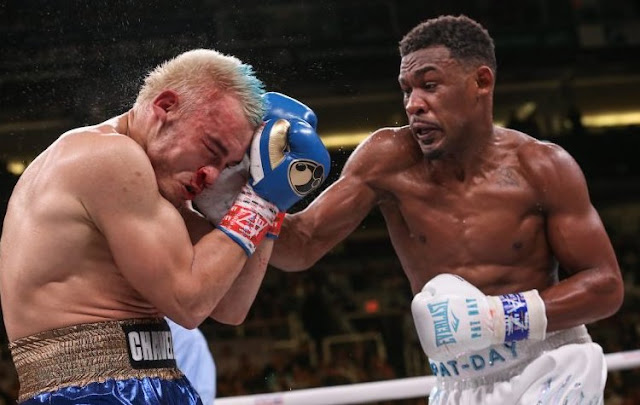 The former two time middleweight titlist Daniel Jacobs made a successful debut at middleweight with a fifth round stoppage victory over Julio Cesar Chavez Jr., who ended the fight in his corner on Friday evening at Talking Stick Resort Arena in Phoenix, Arizona.

The referee Wes Melton was forced to end the fight after five rounds after a reports of a broken nose from Chavez Jr. corner and the whole performance and stoppage wasn’t taken well by the audience, who expressed their unhappiness with boos and threw flying debris into the ring in protest .

The build up to the fight was more of a mess from the Chavez’s end, starting from his skipping a pre-fight random drug test drug test regulated by the Nevada State Athletic Commission, which prompted his temporary suspension and the change of Venue from Las Vegas to Phoenix, Arizona.

The fight was later allowed to go through after Chavez Jr. acquired a temporary restraining order against the Nevada State Athletic Commission (NSAC) after a legal battle and after that, a negotiation with Jacob’s team to change the weight limit from the usual 168 pounds to 173 pounds catch-weight.

Jacobs still made the scale at super middleweight limit of 167.5, while Chavez Jr. made 172.5 but was significantly larger than and Jacobs testified to that fact after the fight.

“I just wanted to get acclimated to the punches,” admitted Jacobs, who took a couple of rounds to get untracked. “It was my first time fighting… this was the biggest I’ve ever been in my career. I wanted to make sure I could take the punches.”

The first few rounds were in favor of Chavez Jr., who seemed very settled from the opening bell, while the former middleweight titlist Jacobs patiently fought from the outside and continued that way through the first two rounds.

In the third round, Chavez Jr. took the center of the ring looking for openings but Jacobs just made sure to play along with his teams game plan using utilizing lateral movement and using shake of boxing and a flashy body attack, sneaking in ones in a while to land some combinations.
Jacobs drew closer in the fourth round and preferred fighting in closed quarters and used body movements to land behind Chavez Jr. defense and towards the middle of the round, Chavez took a brief control over the fight, charging Jacobs to the ropes but nothing much was achieved after that.
The fifth round started with Chavez Jr. complaining of fouls. the referee only urged him to continue fighting and that he did, landed a few left hooks that briefly stunned Jacobs after the full three minutes, Chavez Jr. retired in his corner with a complain that he couldn’t breath through his nose because of some Headbutt.
Chavez Jr. (51-4-1 (33KOs) who lost for the second time in three fights ran out of the ring after the confusion after the stoppage caused an adverse reaction from the Fans and it remains to be seen, whats next for him.

Daniel Jacobs won his first fight since winning a unanimous decision over Sergiy Derevyanchenko in October to earn a his reign as a middleweight champion. He Then lost the title in his first attempt to defend the title against Middleweight King Canelo Alvarez. 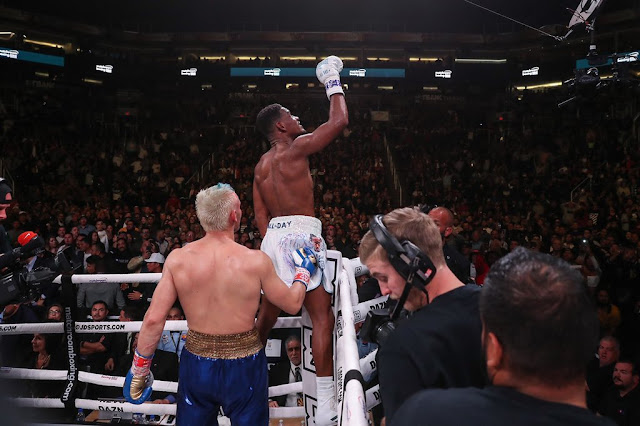 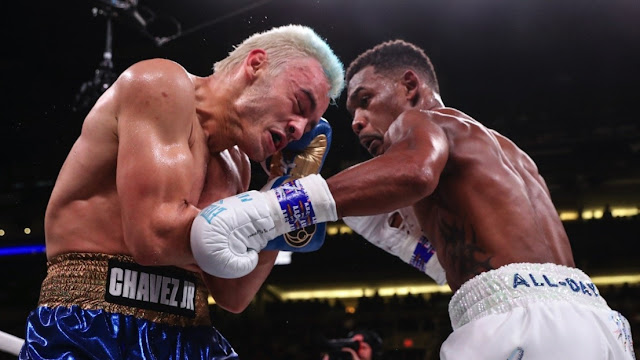