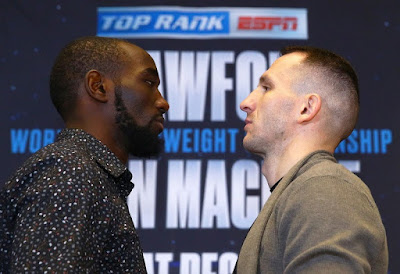 Terence Crawford faces fellow unbeaten stable mate Egidijus Kavaliauskas in his next Welterweight title defense on Saturday, when he attempts defending his WBO welterweight title for the third time since knocking out former champion Jeff Horn In 2018 to win the belt.

Supporting the card, will be Teofimo Lopez going toe to toe against IBF lightweight champ Richard Commey in his first world title fight.

Crawford (35-0, 26 KOs) of Omaha,  Nebraska has defended the WBO strap twice since defeating Horn in June 2018, first by Jose Benavidez in the twelfth round and then in his last outing stopped Amir Khan in six rounds, back in April. He is has won 9 of his list 10 fights via KO and is a clear favorite, going into the fight.

Unbeaten contender Kavaliauskas (21-0-1, 17 KOs) fighting out of Luthiania has done well for himself holding on to his zero (0) after 21 fights and will be going into his first world title fight, underrated and with absolutely very few pundits, fans and professionals giving him a chance against the well decorated three division titlist Crawford. However, he is going on the back of a majority draw from his last outing against Ray Robinson.

Teofimo Lopez is one of fastest rising stars in boxing and will be lookin forward to ending 2019 with a World title when he steps in the ring against Commey.  Lopez has fought Thrice already in 2019, scoring KO’s in four of his last five fights with his last outing ending, a one sided unanimous decision victory over Masayoshi Nakatani.
Ghana’s Commey is on a five fight winning streak since losing two split-decision loses to Robert Easter Jr. and Denis Shafikov in 2016. He knocked out Isa Chaniev in February to win the title, then stopped former titlist Ray Beltran in the Eight round.

Terence Crawford Vs Egidijus Kavaliauskas is hosted by Top Rank with Main Card Airing live on ESPN from 9pm ET. while undercard will Air on ESPN+ at 5pm ET.

[…] Commey Vs Teofimo Lopez is part of the Crawford Vs Kavaliauskas triple header, which kicks off at 9pm ET on Saturday 14th […]