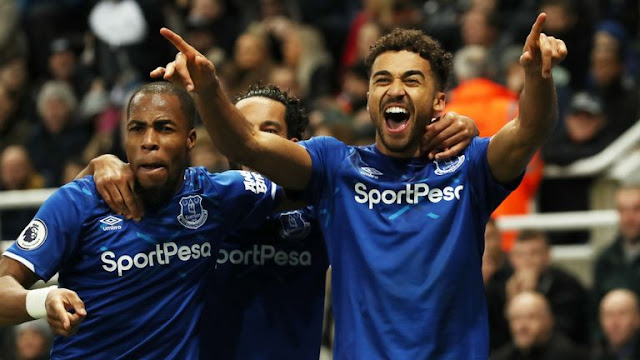 Everton’s Calvert-Lewin seems to be the guy all defenses should be mindful of especially since Carlo Ancelotti took over the Merseyside Blues. After scoring the winning goal in their Boxing Day game against Burnley, He scored a brace against Newcastle United to ensure six points in the last two games for the Ancelotti’s new side.

The 22 year old Calvert-Lewin, opened the scoring after Just 13 minutes into the game but Fabian Schar leveled the game in the 56th minute but that only lasted for eight minutes as Calvert-Lewin gave the Blues another lead after meeting Richarlison‘s cross and scoring from close range.

Carlo Ancelotti now Joins David Moyes and Joe Royle as the only Everton managers to win their first two games at the club and the win now sees Everton move above Newcastle into 10th place and leveled with 25 points.

Carlo Ancelotti who made five changes to the starting line up bringing Theo Walcott, Moise Kean, Tom Davies, Leighton Baines and Michael Keane, saw his changes pay off in just 13 minutes after Baines was brought down by Joelinton, and the resulting free kick taken by Gylfi Sigurdsson got deflected to Calvert-lewin’s path and he made no mistake from close range.

Newcastle United became alive after the opening goal, the eighth goal conceded at St. James Park and almost go an equalizer before the end of first half but were however unlucky and ended the half trailing.

The Toons got the game leveled in the 56th minute after Theo Walcott brings down Willem, whose cross was dropped down by Andy Carroll for Schar for a close range finish.

Richarlison was given a free role after being located at the plank by Walcott, he sends in a low cross into the box and Calvert-lewin was there to tap in the decisive Goal