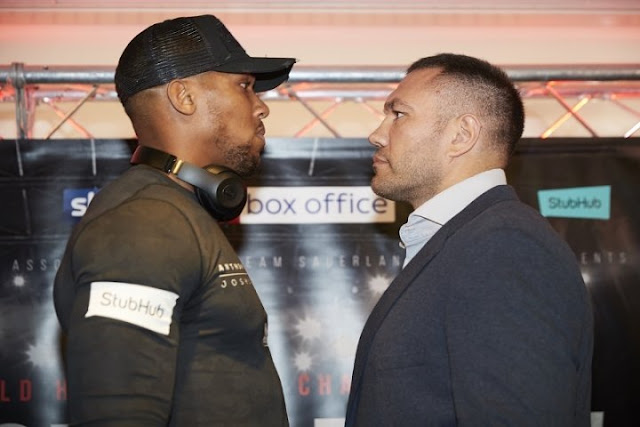 After reclaiming the IBF, IBO WBA and WBO world heavyweight titles Anthony Joshua will now have to battle Mandatories and the first will be either IBF Mandatory challenger Kubrat Pulev or Oleksandr Usyk who is WBO mandatory.

MarchRoom Boss Eddie Hearn has however made his choice with his lot falling on IBF’s mandatory Kubrat Pulev, whom according to him will get a crack at the title in April.

“I believe his next fight will be in April, and my gut feeling is it will be against Kubrat Pulev,” Hearn told BoxingScene.com. “Joshua doesn’t want to vacate the belts. He loves them. We need to have a conversation of common sense between the governing bodies. We’ve written to to the IBF and WBO. Who goes first? You can’t just hold Anthony to ransom and say you have to vacate one. There is a rotational system that chronologically tells you who goes first. It’s the IBF. But I also represent Usyk, so I have to push for him as well. It’s a bit of a messy situation, but Joshua will defend his titles against whoever he has to. But he really wants the undisputed fight, so we’ll so what happens on Feb. 22 between [Wilder and Fury].”

Kubrat Pulev has been the IBF’s mandatory for some years now and had been scheduled to face Joshua, back in October  2017 but this didn’t materialize because Pulev pulled out due to an injury and Joshua had to defend the titles against Carlos Takam, whom he stopped in the 10th round of that fateful bout.

Pulev has been waiting for his opportunity since losing that first shot and has defeated his last three opponents since the injury to ensure his position as a mandatory remains intact.

Joshua on the other hand, recovered from his first professional defeat with a unanimous decision victory over Andy Ruiz Jr in their Rematch two weeks ago to reclaim his heavyweight titles in Saudi Arabia.