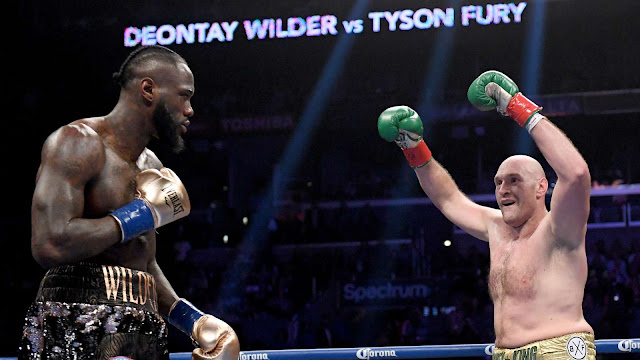 The WBC champion Deontay Wilder will ones again face Lineal Heavyweight champ Tyson Fury in a very anticipated rematch on Feb.22nd as announced on Wednesday, the whole boxing world will give a shot at predicting the possible outcome of the fight and one of those predictions you cant just ignore is that of IBF, IBO, WBA and WBO world heavyweight champion Anthony Joshua.

Wilder will put his WBC strap ones again against Fury, after they both battled to a controversial split draw in their first meeting back in December 2018 and while they prepare for their rematch. Anthony Joshua , who recently offered himself to assist Fury in preparation as a sparring partner , has also offered his prediction or according to him, the most possible outcome of the fight.

Speaking to IFL Tv about his intentions to become Tyson Fury’s sparring partner, Joshua see’s his fellow Brit and Heavyweight contender as a world class fighter with a lot of boxing experience to learn from and believes that though he fits the world class description too, there is still a lot he can learn while sparing Fury.

“Fury’s a world-class fighter, and I’m a world-class fighter that’s still trying to improve so that I can become an elite-level fighter,” Joshua said to IFL TV. “Sparring Fury’s only gonna do me good, in my opinion. I’m never too big for my boots where I can’t learn anymore. So that opportunity for me to spar Fury is for my own benefit as well.”

Anthony Joshua doesn’t just want Tyson Fury to come out victorious because they share the same Nationality or could actually become good friends in the future but actually wants him to win because there is a huge possibility, Fury welcomes a unification fight with all Heavyweight Titles at stake sometime in the future and then gave his prediction.

“The reason why I thought about it and why it came to fruition for me is because I feel like if Fury was to win that fight [against Wilder] I think he’d be more inclined to fight me next and quicker, than Wilder would,” Joshua said.
“How long I’ve been waiting to fight for the championship belt, I think if Fury had it, me and him would have got a deal done. That’s why I was rooting for Fury to win because I just want to fight and collect my last belt. If I was betting man, I think Fury wins.”

Deontay Wilder Vs Tyson Fury is scheduled to take place on February 22nd at the MGM Grand Arena in Las Vagas.