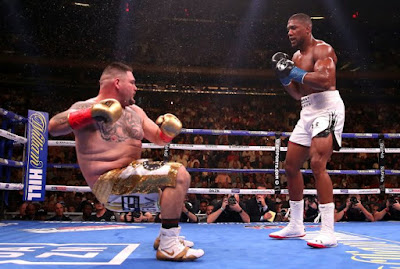 Ruiz Jr. shocked the world against all odds on June 1st at Madison Square Garden, when he dropped Joshua four times en route to a seventh round stoppage victory. Despite the shock, which still stays fresh on the minds of most of the Fans ahead of the event, Khan is backing Joshua to win the fight by stoppage.

Khan and Joshua had a big rift on social media back in 2017, when Khan accused Joshua of having an affair with his wife but that was resolved after all accused parties denied all accusations and an apology was issued from Khan after the resolution.

Khan is firm on the fact that Joshua could reclaim the Heavyweight titles from Ruiz Jr. however, he will have to make use of just one strategy “Making Use Of His Boxing Skills And Avoid Engaging In A Brawl”.

“He can’t really go in there throwing all the big shots and I think by him coming down in size, it’s definitely going to make him box a little bit more. I know exactly what it’s like when you have a lot of muscle, you want to stand there and trade but I don’t think that’s his style. His style is boxing – being smart,” Khan told Sky Sports.
“I think what won him the Olympics was boxing, and I think what won him the world titles against (Wladimir) Klitschko and everyone else was boxing and being smart. He needs to go back to boxing. If he can be smart, use his jab, keeps it long, then I think the knockout will come.
“I think AJ will stop him – maybe between rounds five and seven if he sticks to his game plan. I’m sure he’s going to be ready for this.”

Anthony Joshua has promised action, fireworks and promises to end the fight within the distance, when he gets in the ring with Ruiz on Saturday 7th of December at the Diriyah Arena in Diriyah, Saudi Arabia.

Anthony Joshua actually dropped Ruiz in the third round and for a second looked like, He would actually Knock him out but the determined Ruiz got back to his feet and dropped Joshua twice in the same round and another twice in the seventh round to earn the technical knockout victory.