Skip to content
HomeSports NewsAndy Ruiz Jr. KOs Anthony Joshua In Rematch Because He Got His Number – De La Hoya 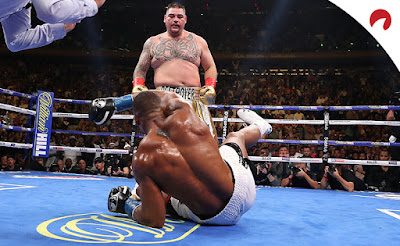 Boxing Hall Of Famer and Golden Boy boss Oscar Dela Hoya has dropped his prediction for the Anthony Joshua Vs Andy Ruiz rematch and from his perspective sees His fellow National Ruiz repeating the June first feet in the anticipated fight which is scheduled for this Saturday  at the Diriyah Arena, Diriyah, Saudi Arabia.

De La Hoya seems to be a close observer of the Brit and believes that the former champ has never fought differently in his career even in his title fights but sees his fellow country man Andy Ruiz getting better, faster and easily secure a win because he “has his number”

“I think we’re going to have the same result,” said De La Hoya, founder of Golden Boy Promotions. “Andy Ruiz probably has his number. Ruiz is going to get better, faster and stronger. I don’t think Anthony Joshua is going to correct anything.”

The fight will take place in Diriyah, Saudi Arabia in a Venue that has very little to do with Boxing in the past however, Eddie Hearn sealed the deal with a lucrative sum and De La Hoya would definitly do the same with his world champions, if presented with such a lucrative offer.

The Mexican believes that  Anthony Joshua is approaching the rematch in a wrong way and will not be able to make changes enough to earn his a victory on Saturday but leaves open the boxing uncertainty which is always present in a heavyweight fight, especially when the fighter has a big punch.

“[Joshua’s] been fighting the same way for all these years,” said De La Hoya. “As a fighter, it doesn’t make me think that he can change things up. But who knows. In boxing, when you’re a heavyweight and have that heavy punch, anything can change. I just think Ruiz has the better chin, and has less distractions than what Joshua has.”