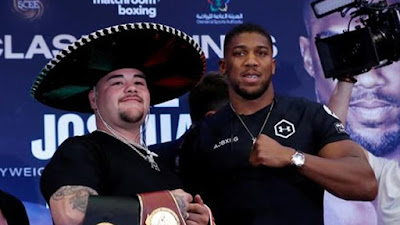 IBF, IBO, WBA, WBO heavyweight champion Andy Ruiz will rematch Anthony Joshua this coming Saturday and with less than a week left to this anticipated showdown, the Mexican has made clear he will be giving his all to retain his belts when they both meet in the ring.

Ruiz shocked the world on June 1st at Madison Square Garden , when He went in as a late replacement, overcame a third round knockdown to drop Anthony Joshua four times en – route to a seventh round KO victory, winning the Heavyweight title and penning his name down in history as the first Mexican Heavyweight champion.

However, many boxing experts believe that Andy Ruiz was actually lucky to win the fight and some lay emphasis on the countenance and health of the champion during the first fight. Some believe the the financial success from the first fight has gotten to him and Joshua will have no issues defeating him in a rematch However, Andy Ruiz will be out to prove them all wrong just like in the first fight.

The first fight between Anthony Joshua and Andy Ruiz got all the suspense and fireworks with both fighters hitting the canvas before the seventh round stoppage but this according to Ruiz is little compared to what he expects in the rematch, as he expects Joshua to make adjustments and promised to be ready for everything the former champ brings to the ring.

“Fight fans are going to see the same thing in Saudi Arabia, they saw on June 1. The guy with big dreams going in there to dominate and to be heavyweight champion. Of course, they’re going to see a lot of fireworks. If he knocks me down, I’m going to get up and knock him down. I know he’ll try to do the same if I knock him down. The main thing is to stay focused and disciplined,” Ruiz said.

“He is going to try to make adjustments. I don’t know if he wants to exchange punches, but I’d love for him to do that because I’m the more skilled boxer. He’ll try to box me round and use his jab. But for how long? How long can he keep me away from hunting him down? That’s what we’ve been working on most of all right now, heading into the fight.

“I want to impose myself in this fight, but I don’t want to overlook him. He’s still a dangerous fighter. I respect him and all the fighters who risk their lives inside the ring. He’s going to have some tricks up his sleeve and it’s my job to not let that affect me. The main thing is pressure, throw combinations and use my speed. I can’t let him grow balls in there.”