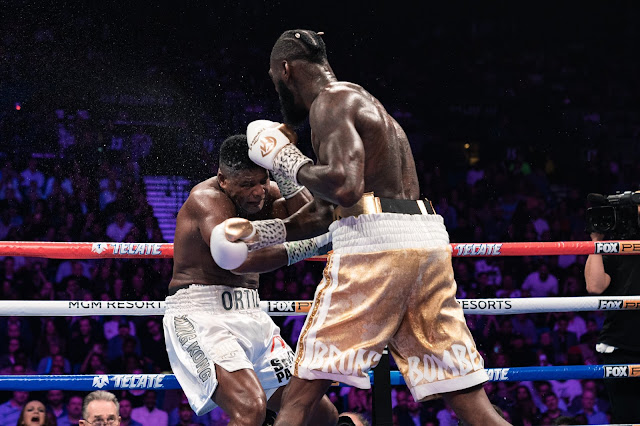 The Undefeated WBC Heavyweight World Champion Deontay knocked out top contender Luis Ortiz in the seventh round of their fight on Saturday Nov. 23rd at the MGM Grand Arena.

The 33 year old champ Deontay Wilder said before the Rematch with Luis Ortiz, that fighters need to be 100% percent through out a fight but he will only need a moment to end the fight  and that’s all we saw on Saturday night.

Luis Ortiz was leading on all the scorecards when all of a sudden, he was hit by one big right hand that saw him sleep through the count by the referee.

Ortiz was in better condition than the first fight and was 4 pounds lighter than his he was in the first fight but this didn’t stop Wilder, who was making the 10th defense of the green belt he won from Bermane Stiverne almost five years ago.

This was Wilder’s 10th title defense and two of those has been against Luis Ortiz but while He celebrates the win, it also clears all obstacles for a potential rematch with Tyson Fury, which is rumored for early next year.