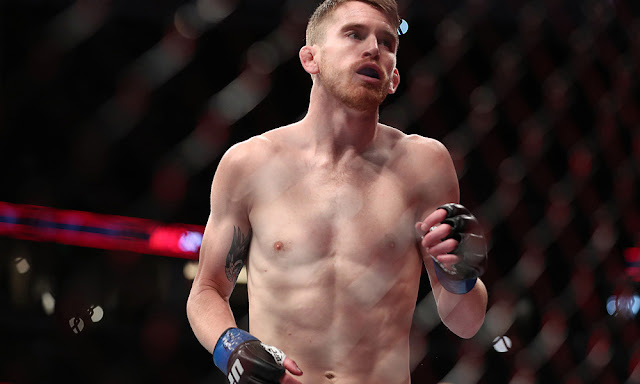 Cory Sandhagen will have the honor of welcoming “Legend” Frankie Edgar to the Bantamweight division in the Co-Main Event of UFC Raleigh which is scheduled to take place on Jan. 25th.

Despite always being a fan of Edgar and all the respect he has for him, he definitely won’t be settling for a loss and views the fight as unfortunate Match up for the “Legend’.

“It’s a bummer almost for me because I really like Frankie,” Sandhagen told MMA Junkie. “I’ve always been a really big fan of Frankie and I don’t want to be the one who puts the stamp on his career. But that’s kind of what my job is. That’s what I’m going to do. Not to sound arrogant. But he has to fight me on his first fight coming down to 135? That kind of sucks for him.”

Edgar is looking to reinvent himself at Bantamweight after suferring five straight title fights, his last was a five round Unanimous Decision loss to UFC Featherweight champion Max Holloway at UFC 240.

“Not to sound punny, but I don’t think ‘the answer’ for him was to come down in weight… I think Frankie will feel a little bit better at 135 if he loses weight the correct way… (But) I also don’t think it’s going to be the easiest thing in the world for him.

“If he is going to do it right, he’s not going to have as much energy through training camp, which is going to be detrimental, too. Fighting me, I think that I’m kind of a nightmare of a fight for almost anyone in the division.”

Cory has also watched Edgar’s fight with the featherweight champion Max Holloway and with that claims to have seen a few techniques that will definitely be beneficial to him when they both share the Octagon.

“I’m obviously catching him on the tail end of his career,” Sandhagen said. “That being said, I didn’t think he looked too bad against Max. I think the problem with Frankie — and I watched this in his post-fight interviews after Max — he looked really broken and confused as to why he wasn’t winning anymore. He was kind of looking for a solution.

“As much as I kind of hate to say it, I think that solution is you had your reign in the UFC. You did really good. You became a legend. You beat a lot of really tough guys and were the champ for a little bit. Like, that was your time. When I was watching him do that, as sad as it is, I wanted to be like, ‘It’s someone else’s time now.’ You don’t get to fight forever.”