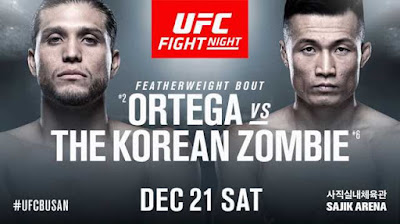 Brian Ortega (14-1, 1 NC) the Brazilian jiu-jitsu specialist will be entering the main event of UFC on ESPN+ 23 against Chan Sung Jung A.K.A The Korean Zombie with a 70% stoppage rate, having won his first seven fights over via submission and after then gradually developed some excellent striking that has earned him three more stoppage wins via KO/TKO.

Striking on the order hand through records has Korean Zombie topping with an 87% KO/stoppage/TKO rate , having finished eight of his opponents and winning five by KO. However, Ortega has only been defeated ones, while Sung Jung has been defeated five times but each loss was against very competitive opponents, who needed to dig down for a victory and the only knock out loss came in the fifth round.

For the Hardcore fans, this fight has all the potential to be one of the most brutal fights in UFC history and questions arising from this will be, Will Ortega continue his record of not being finished in a competitive bout or will he get caught by a brutal Sung Jung or will Ortega find a way to finish off the Korean Zombie or will the fight be ending early or will both stall each other through out the rounds.

No matter your opinion in this case, I believe the Korean Zombie has sometimes seem crazy with his risk taking, having been too aggressive at times has cost him and Ortega could adopt a strategy that will see him follow up till Sung Jungsets himself up