Luis Ortiz – The Count Was Quicker Than I thought 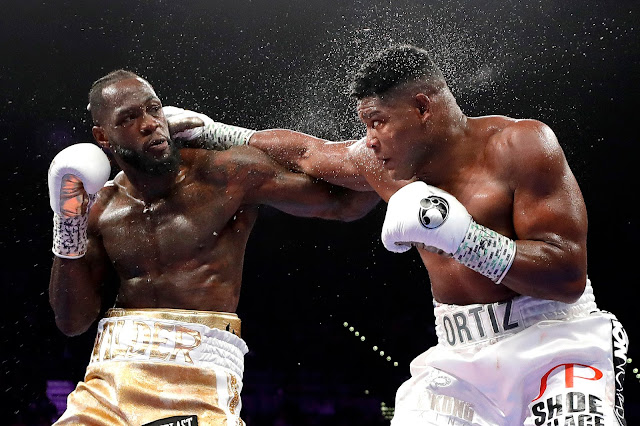 Luis Ortiz got stopped by WBC Heavyweight World Champion Deontay Wilder in tge seventh round of their rematch at the MGM Grand Arena on Saturday night.
The fight was taken by both as an opportunity to clear gdgsh  and with determinations of ending the fight with a KO just like the first which ended a 10th round knockout victory for Wilder. However, Wilder still emerged victorious with a one punch KO of the Cuban, who was leading on every scorecard before the punch.
Wilder retained his unbeaten record along with his Belt and recorded his 10th heavyweight title defense, which punches his name on Boxing records as the record equals a record set by Boxing legend Mohamed Ali.

Ortiz after he second defeat didn’t take anything away from the Champion but had a few things to says concerning the count out by the referee. He believes, the referee counted him out so quickly and that, he was still able to continue.

“This is boxing,” said Ortiz. “I said that one of us was going to get knocked out and it wasn’t going to go 12 rounds. I was clear headed when I hit the canvas. When I heard the referee say seven I was trying to get up, but I guess the count went a little quicker than I thought.

“This was a great fight and I thought I was clearly winning. I got caught with a big shot and I have to give Deontay Wilder a lot of credit. I knew my movement was giving him problems. I landed some big shots and I thought I had him hurt. I thought I was up by the count and could have continued.

Despite the loss, Ortiz is happy with his performance and tips himself to beat anyone in the division, nurturing intentions of working his way into a title fight in the future

“Deontay showed great will and I’m not ashamed with my performance. I know I can beat anyone in the heavyweight division. My career is not over. I’m going to work my way back into a big fight.”