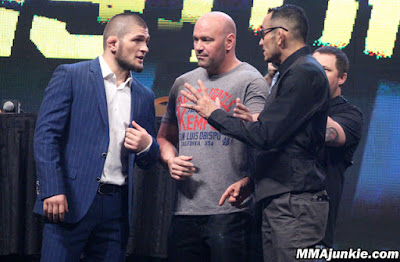 UFC lightweight champion champion Khabib Nurmagomedov, according to reports is expected to give top contender Tony Ferguson a chance to win the UFC strap in an anticipated, which is targeted for a UFC pay-per-view on April 18 in Brooklyn, N.Y.

UFC President Dana White with a few other reliable sources have also confirmed the fight is in works and that negotiations are presently on going for the anticipated showdown. This means that terms and contracts have not yet been agreed and signed.
the fights have initially been scheduled for dates in the past but serious weight cut issues and injuries prevented the fight from happening. However, the UFC has decided to give the match up between Khabib Nurmagomedov and Tony Ferguson another try.
Enter your email address:
Delivered by FeedBurner

The Undefeated Lightweight Champion Nurmagomedov has been dominantly terrifying in the UFC lightweight division since signing with the MMA banner and has most recently submitted former lightweight Champion Conor McGregor and Dustin Poirier in his first and second title defenses and will be looking forward to a third, when he faces Ferguson on April 18. However, this might be the toughest opponent he has ever faced. 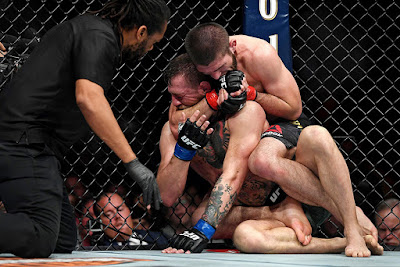 The former Interim 155 pound champion Tony Ferguson worked his way to the No. 1 spot in the lightweight division with 12 straight wins in a row which also includes a win over Kelvin Lee and a pair of  brutal knockout victories against top contenders Anthony Pettis and Donald Cerrone in his last two outings.
Nurmagomedov and Ferguson will look to settle their differences at ones when they share the octagon on April 18, provided nothing goes wrong as its has been in the last four times this fight was slated for an event. 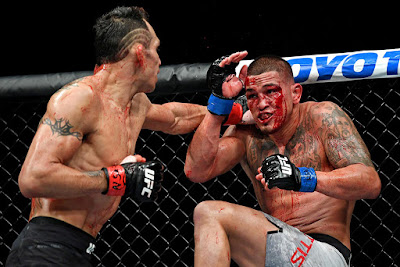 […] Conor McGregor Vs Donald Cerrone is one of the most anticipated fights of 2020 and many Fans, Trainers and Professionals have their own perspective or opinion on what the possible outcome of the UFC 246 headliner would be. However one of those you should take seriously will definitely include that of UFC lightweight contender Tony Ferguson. The former lightweight interim champion Ferguson (25-3 MMA, 15-1 UFC) was actually on the list to face Conor McGregor (21-4 MMA, 9-2 UFC) in his return since losing to Khabib Nur in early 2018. However, a shake up by the UFC placed “Cowboy” Cerrone (35-13 MMA, 22-10 UFC) as the one to face McGregor in the UFC 246 headliner. Ferguson predicts a fire fight with both fighters firing their guns and giving their all but believes that a well targeted kick from Cerrone will send Conor McGregor tumbling to the Canvas and that might spell the end of the contest. […]