Floyd Mayweather Announces His Return From Retirement In 2020 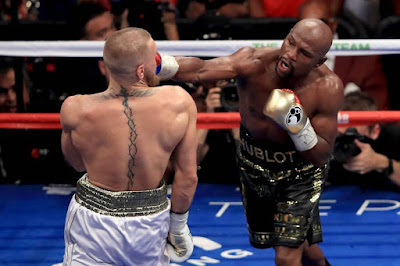 Retired former five divison champion Boxer, future hall of famer Floyd Mayweather seems to be playing with our minds after recently claiming to be done with everything professional boxing, he through his social media account,says he will be coming out of retirement in 2020.

Floyd Mayweather retired from professional boxing after stopping UFC star Conor Mcgregor in the 10th round of their super fight in 2017. a fight that generated over 4 – million pay per view buys and has since then been in exhibition fight which has seen his earn huge amounts of money. Before now, he seemed to be enjoying his retirement but he surprised the world with the information.

“I’ve got calls to get back into the ring, but my health is my wealth,” Mayweather told Reuters on Tuesday. “Boxing is a very, very brutal sport. In the last few years a lot of fighters have died inside that squared circle. You have got to know when to hang it up. I had a great career.”

Floyd Mayweather was last seen in the ring back in December 2018, when he demolished 19 year old Japanese Kick-boxer Tenshin Nasukawa in round one of their three round exhilbition bout and after that said he was open to more exhibition bouts

“I’ll still travel and do exhibitions. I make great money doing exhibitions — between $10 and $30 million,” Mayweather said. “I think I make more doing that than most fighters make fighting.”

Floyd Mayweather has been a master of uncertain announcements during big fight weeks and had ones announced he was switching over to mixed martial arts and also a possible rematch with Manny Pacquiao but this never materialized which could make Fans think of his 2020 comeback post on Thursday night.

#Repost from Instagram/@FloydMayweather @danawhite and I working together again to bring the world another spectacular event in 2020.#boxing#UFC#mma#mayweatherpromotions pic.twitter.com/TVNDs1HlRe

Mayweather has also recently posed with UFC president Dana White in an NBA Game, posted with a caption “I Working together again to bring to the world a spectacular event in 2020”. However, we have seen this announcements in every big fight week, which is always seen by fighters and fans, as a strategy of stealing the attention from a big fight, However his promotional company is also handling the fight between WBC heavyweight champion Deontay Wilder and contender Luis Ortiz at the MGM Grand Arena on Saturday night.

The 43 year old former pound for pound fighter has never been in the boxing ring with an actual boxer since his win over Andre Berto back in 2015.