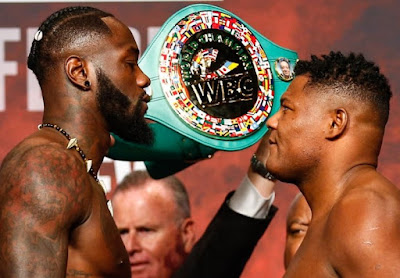 Their first meeting ended a 10th round KO victory for the WBC champion, who had to struggle, while been rocked through the 7th round by a very determined Ortiz but that was all Ortiz had for the fight that day. He eventually got overpowered by his younger foe, who knocked him out with an uppercut in the 10th round.

This fight has got all it takes to trill everyone,especially for the fact that Wilder is out to prove his critics wrong by knocking out Ortiz in spectacular fashion, while Ortiz is out to make perfect the mistake He believed he made in the first by not knocking Wilder out in his most vulnerable state.

The fight card has another two title fights to trill you with coupled with an action packed line up that you shouldn’t for any reason miss. However, if you have any reason to miss… we at Dopeclics will bring you live action, coupled with images and video highlights from the event. Check Back For Full Results