Deontay Wilder And Luis Ortiz Both Going For KO Ending 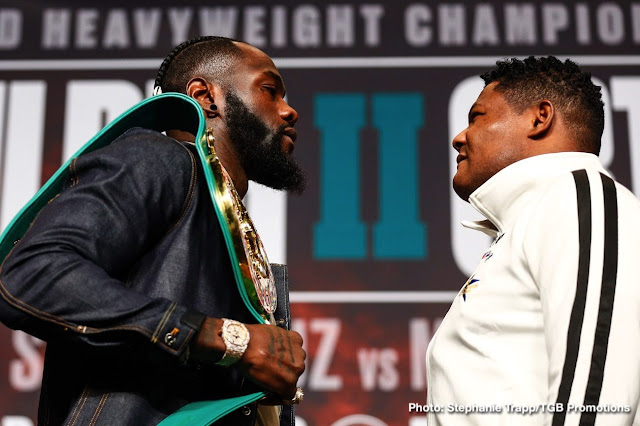 WBC Heavyweight World Champion Deontay Wilder (41-0-1, 40 KOs)  and title challenger Luis Ortiz (31-1, 26 KOs, 2 NC) will be giving it another 12 rounds in the boxing ring after both gave their all in one of the most entertaining fight of 2018.

Wilder won their first meeting with 10th -round KO after struggling through a very tough seventh round, when Ortiz rocked and wobbled the champ till he got saved by the bell.

This time Ortiz envisions ending the fight within the distance and definitely in his in his favor as he believes, Wilder won’t survive through, if he is caught in such a situation as that of the first fight.

“Like I said before, and Deontay also said, this is not gonna go 12 rounds,” Ortiz said during a press conference Wednesday at MGM Grand. “Either he knocks me out or I knock him out. And I wish there were no bells between rounds, so we could just keep going. This is gonna be a war.”

The 34 year old from Alabama dropped Ortiz Thrice, en-route to the victory and wasn’t contractually obligated to give Ortiz a Rematch but chosed to because he feels they both had a kind of connection from their first meeting. Wilder gave Ortiz Ortiz the fight due to his Hunger to win.

“It’s nothing more really to be said,” Wilder said during the press conference. “You know, now it’s time for action. And I’m looking forward to giving you guys the best of me. Luis is looking to give you guys the best of him, along with the rest of the guys on the card. That’s all you guys can ask for. You know, we trained very hard to get prepared and to go to war. This is war.

“And with our fight, you already know what to expect. You know, the hard part for you guys should be the waiting part. You know, some of you probably ain’t gonna be able to sleep come Friday night. And that’s OK, because I’m probably gonna be right there with you, visualizing, meditating, getting ready to go to war. This is what it’s all about. I’m just excited to be here. I can’t wait.”