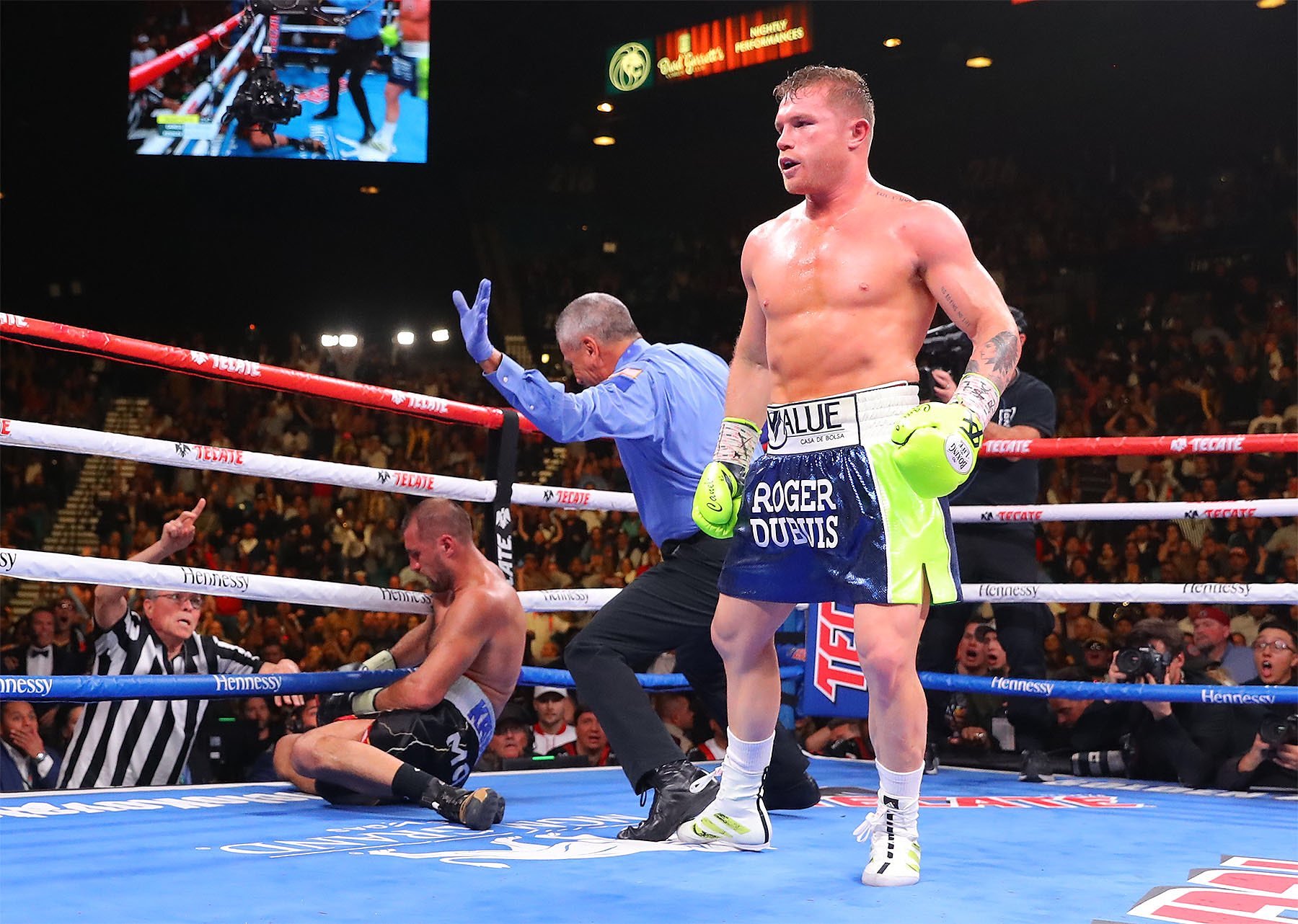 Canelo Alvarez can’t stop breaking records. This time, he moved up two weight divisions and brutally knocked out WBO light-Heavyweight Champion Sergey Kovalev in the eleventh round to become a four – division champion in front of a crowd of 14,490 at the MGM Grand Garden Arena on Saturday night.
Alvarez (53-1-2, 36 KOs) connected a devastating combination on Kovalev in the eleventh round, sent the 37 year old crumbling to the canvas and eventually out cold supported by the ropes at exactly 2:15 of the 11th round of their twelve round fight, prompting the referee Russell Mora to immediately stop the fight after understanding, He was definitely unable to continue.

Canelo went into the fight as an almost 5 – 1 favorite the well experience, tested and seasoned former champion Sergey Kovalev (34-4-1, 29 KOs) and after 10 rounds Judges Julie Lederman and Dave Moretti both had Alvarez ahead, 96-94 while Judge Don Trella had it even at (95-95).

“The plan overall was patience,” Alvarez told DAZN’s Chris Mannix in the ring following his victory. “That was basically it, to have patience. We knew that it was gonna be five or six rounds, and that it was gonna take some time for me to get him. But obviously, he’s a great fighter. But again, I’m new in this weight, I’m new in this division. And much credit to him – he’s a great fighter. But we stuck to our game plan, basically. And basically, it was delayed a little bit. But overall, it was successful.”

Sergey Kovalev had to overcome some serious problem in the eight round of his fight with his then mandatory challenger Anthony Yarde to eventually win the fight and thereby setting up a class with Alvarez, which also earned him a career high $12.5 million on Saturday night. Before the fight, he was one of the three recognized titlist at Light Heavyweight and despite facing a more shorter opponent in Canelo as compare to Yarde things couldn’t go through as he planned. Canelo took everything Kovalev had and eventually KOed him.

Kovalev owned the height advantage, weight and even reach advantage in the ring but saw Canelo measure up with him and raised his gloves against him, connecting shots at angles that much experienced light heavyweight fighters found difficult to connect, eventually drawing some praise from him after the fight.

“It’s OK,” Kovalev said. “It’s a good experience for me. Canelo is really a great champion. And a little bit right now, I didn’t recover from my last fight. But it’s OK. Thanks for [the] fight. Canelo, big respect with him. He makes history, you know?”

DAZN actually allowed the main event of UFC 244 to get concluded before starting the Canelo – Kovalev main event and even went ahead to televise the UFC 244 main event in a big screen at the MGM Grand Arena for the Canelo Kovalev fans to watch while they wait for Masvidal – Diaz main event to end.

The fight was much more tactical than imagined, as the fans were treated with everything from jabs to hooks and some serious boxing defensive moves but just as everyone was thinking the fight was going to the cards, Canelo connected Kovalev with a right hand that send Kovalev backwards with shaky legs and then down and unconscious.

They both started slow in the first round and little action as both fighters tried to feel out one another. However, Alvarez connected a left hook that sent Kovalev staggering sideways before the end of the round. Alvarez continued with hard body shot early in the second round, as Kovalev found it difficult to break his guard.

Alvarez received a heavy left in the third round but was able to take it well. in the fourth Alvarez connected a left hook in the fourth round and was able to connect some body shots after breaking up Kovalev’s guard again

Watch The FULL Highlights Below

Kornilov Wants Dmitry Bivol Vs Gilberto Ramirez Next, Call It An Ideal Match Up – Dopeclics

[…] mandatory challenger to the WBO title at light heavyweight. The vacant title was relinquished by Canelo Alvarez, who knocked out Sergey Kovalev in the Eleventh round of their super fight last year. Alvarez has decided to drop down in weight to handle mandatories at […]